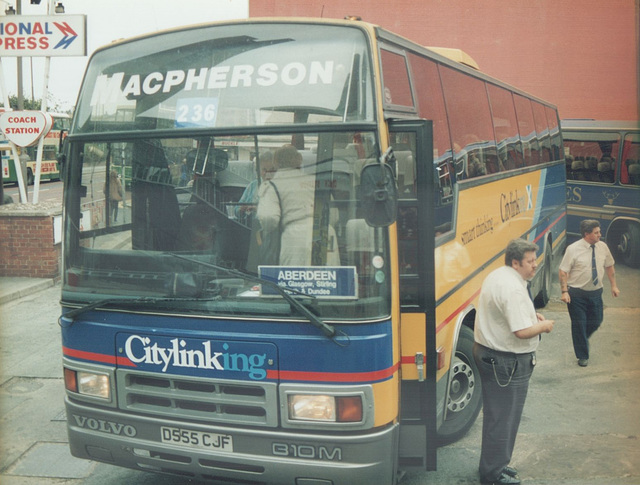 Thursday 17 October 1991 (approx 1130) - MacPherson Coaches D555 CJF seen in the National Express coach station at Wellington Street, Leeds. The two drivers working the service today are in the picture, John nearest the camera and Ivan further away. Scottish Citylink and National Express (and their predecessors) had had a working agreement spanning 60 odd years but when this agreement was coming to an end in October 1989 National Express acquired the Anglo-Scottish coach operations of Stagecoach and created a Scottish subsidiary, Caledonian Express. Scottish Citylink created its own services to various English provincial towns and cities in competition with National Express/Caledonian Express. National Express was always the dominant carrier south of the border. Driver John, prone to making a little mischief, regularly fed ‘misinformation’ to the National Express inspector at Leeds telling him that the passenger figures were much higher on their service than they really were saying that one or two duplicate coaches had gone ahead omitting the call at Leeds leading the inspector to believe passengers figures were higher than they actually were! (Ref: 153-25)
Suggested groups:
Comments