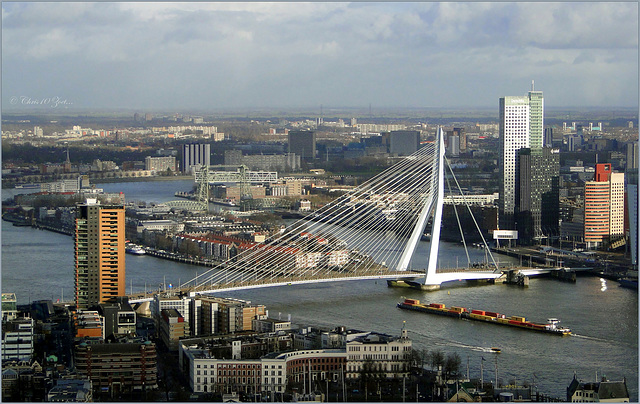 I took this picture through glass from above the Euromast.

The Euromast is an observation tower in Rotterdam, Netherlands, designed by Hugh Maaskant constructed between 1958 and 1960.
It was specially built for the 1960 Floriade, and is a listed monument since 2010.

The Erasmus Bridge (Dutch: Erasmusbrug) is a combined cable-stayed and bascule bridge in the centre of Rotterdam, connecting the north and south parts of this city, second largest in the Netherlands. The bridge was named after Desiderius Erasmus a.k.a. Erasmus of Rotterdam, a prominent Christian renaissance humanist.

The 802-metre-long (2,631 ft) bridge across the New Meuse was designed by Ben van Berkel and completed in 1996. The cable-stayed bridge section has a single 139-metre-high (456 ft) asymmetrical pale blue pylon with a prominent horizontal base, earning the bridge its nickname "The Swan".

Thank you also for this wonderful compliment Mariano.
This bridge is not from Calatrava, but from Ben van Berkel! It's like a swan, so beautiful when the sun is shining on it...

Well done and thanks for making me remember of times spent with ship on shipyard and my wandering around in R’dam....
3 years ago. | Permalink
Chris10 club
has replied to Xata club

Greetz and thanks, Christien.
3 years ago. | Permalink

Thank you for your upcoming weekend greet and compliment Annemarie. You're so kind....

Superb aerial view Christien. That is a fabulous bridge - love the light on the cables in the PIP.
3 years ago. | Permalink
Chris10 club
has replied to Graham Chance club

Thank you Graham, your compliment is wonderful...

Thank you for your kind compliment June...

Greetz and happy friday to you... Christien.
3 years ago. | Permalink