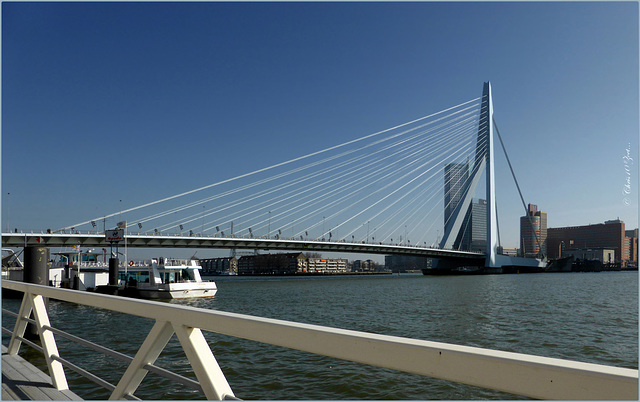 The Erasmus Bridge (Dutch: Erasmusbrug) is a combined cable-stayed and bascule bridge in the centre of Rotterdam, connecting the north and south parts of this city, second largest in the Netherlands. The bridge was named after Desiderius Erasmus a.k.a. Erasmus of Rotterdam, a prominent Christian renaissance humanist.

The 802-metre-long (2,631 ft) bridge across the New Meuse was designed by Ben van Berkel and completed in 1996. The cable-stayed bridge section has a single 139-metre-high (456 ft) asymmetrical pale blue pylon with a prominent horizontal base, earning the bridge its nickname "The Swan".

After costing more than 165 million Euros to construct, the bridge was officially opened by Queen Beatrix on September 6, 1996.[3] Shortly after the bridge opened to traffic in October 1996, it was discovered the bridge would swing under particularly strong wind conditions. To reduce the trembling, stronger shock dampers were installed.

Chris10 club
HFF and Easter Weekend all together!!

Have a great Easter Weekend, Christien.
3 years ago. Translate | Permalink

HFF and Happy Easter, Christien!
3 years ago. | Permalink
Chris10 club has replied to Dida From Augsburg club
Thank you very much Dida...
The weather is not as we want it is with Easter, but the tulips are full in bloom, so I love them.

Rosalyn Hilborne club
Oh Christien, this is beautiful. I love this design!

Best wishes, Rosa.
3 years ago. | Permalink
Chris10 club has replied to Rosalyn Hilborne club
It's one of the modern bridges in the Netherlands Rosa. We call him: Swan. With other light you can see that he's whole white...

Have a nice and sunny Sunday :-) Greetz, Christien.
3 years ago. | Permalink