When the Sun is Coming in... Ceiling of the Choir in the Martini Church, Gronin… A warm summers evening in Norfolk Watching the Tractor... On Top - the Classical Version Au pied du mur Amsterdam Light Festival... 1 An Impression of Sail Amsterdam, 2015... 1 New Born Spring... Erasmus Bridge 'the Swan', Rotterdam... (+PiP) When the Sun is coming up behind the Tree... King of the Birds Honda 600 - 1973. Cigars and Feathers blowing in the Wind... Dreamy Morning... Because it was Extremely Hot last week, I went bef… #14 Happy Dinner :-) The ceiling of Debre Berhan Selassie Church, Gonda… Shoeing of horses II За душу, очи у и чула (For the soul, eyes and sens… Put za Borak A little less than 100 icicles "Black hole" by water vortex Крајолик из мог краја Raft restaurant "Stara čarda" 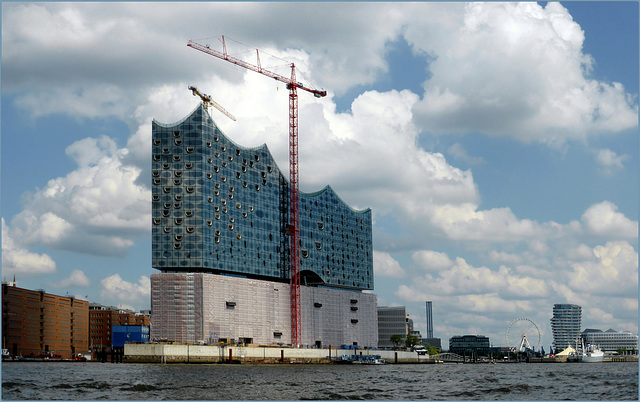 'Elphi': The Elbphilharmonie Hamburg is a concert hall under construction in the HafenCity quarter of Hamburg, Germany. The concert hall is designed by Herzog & de Meuron on top of an old warehouse (Kaispeicher A). It will be the tallest inhabited building of Hamburg, with a final height of 110m.

On 2 April 2007, the First Mayor of Hamburg Ole von Beust, Henner Mahlstedt, Hochtief Construction AG, project coordinator Hartmut Wegener, Hamburg Minister of Culture Karin von Welck and architect Pierre de Meuron laid the foundation stone in the warehouse Kaispeicher A. In 2007, the construction was scheduled to be finished in 2010 with an estimated cost of €241 million.

In November 2008, as an endorsement to the original contract, the costs for the project were estimated at €450 million.

In August 2012, the cost were re-estimated to be over €500 million, which should also cover the increased cost for a strengthened roof. The date of completion has been moved to the summer of 2015 at the earliest.

Currently, construction work is scheduled to end in October 2016, with an earliest opening date of spring of 2017.

The easternmost part of the building will be occupied by "Westin Hamburg" hotel scheduled to open in October 2016. The upper floors west of the concert hall will accommodate apartments.

Your beautiful capture was admired in Historical & Architectural Gems.
5 years ago. | Permalink
Chris10 club
has replied to ╰☆☆June☆☆╮ club

I will miss the cranes once this is finished;-)
5 years ago. | Permalink
Chris10 club
has replied to Gudrun club

I really believe you Gudrun ;) The not finishes building is already so many years there..

Thank you very much for your Yellow Star...