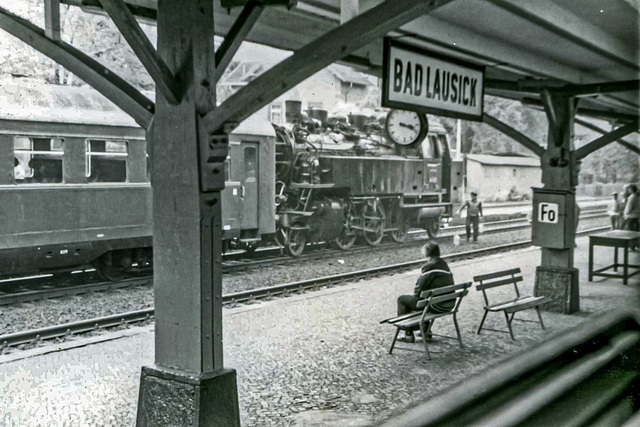 Suggested groups:
43 comments - The latest ones

A very nice picture, from the archives

Was Germany still running steam locomotives in 1987, or is this a stem special?

In a television interview in 1978, Transport Minister Otto Arndt declared that all standard-gauge steam locomotives would be shut down by the end of the Five-Year Plan. That would have been 1981. Today we know better. The express steam locomotives between Berlin and Dresden were retired and Leipzig also sent its 03.20 to retirement on 30 September 1978 and to Wittenberge on 26 May 1979. The Berlin 01s only ran to Stettin until 30 September 1979, the Stralsund 03.00 to Berlin until 31 May 1980. But with all these measures: It went on for years.

Because the oil crisis upset everything around 1980/1981. Many oil-fired machines were withdrawn: Class 44 and 50 locomotives in Wittenberge, Wismar, Eberswalde, Angermünde, Pasewalk, Class 01.5 and 44 locomotives in Saalfeld. The end of the mountain queen, the class 95, was sealed immediately in February 1981. Weeks later, the last Saalfeld 01.

Even after that, steam locomotives were still in use in the GDR. The official end of service did not come until 1988, but the train shown in the photo was probably a special trip.

HBM and have a good new week! Stay safe!

am Haken.
6 weeks ago. Translate | Permalink