Formal Garden suspicion of a little Navajo girl - 1986 Cayo Mambí Meeting of species A Trench Coat for Kimmey (Kimberley Ferron) 2 the insanity of humans 18/50 - Aldersund red door not Kindle Rendevous it's a balcony life pink evenings in far lands living colonial Cafe Alma - Si hay refresco! fishing in the sun 4-Wheel Drive..... 11/50: if I would be the ruler of the globe - edit… horizon_too_far no more war white sailing bluemoon Cristoforo Colombo's landing in Cuba the impossible......or not?

← Group: 0P3N.peace, pace, la paix, Frieden - and other topics that show where planet earth can be improved.

Best Of Best Of 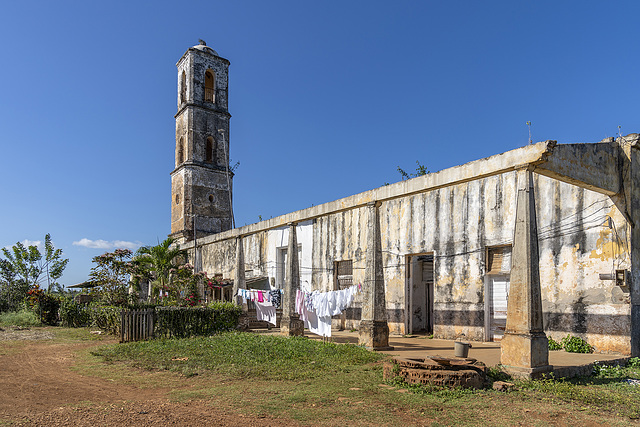 This is the old mansion of the former mill "Dolores" (built 1854). Some people now found a home in its ruins. They have their own tower at least. But there are legends about hearing the sound of thick chains rubbing against the floor, the swaying of armchairs, and the footsteps of people in the nights. Some residents say they feel the lament of slaves whipped by their owners and other stories, linked to what was one of the important Cuban sugar mills.
The factory owners had a large number of slaves for the domestic and agricultural work of the cultivation of sugar cane and their industrial work, in addition there were coffee plantations and palm groves, symbols of a splendor based on mistreatment and oppression. As was the custom at the time, the masters built a beautiful house there in 1872, a reflection of a remarkable economy of which there are still elements of its architecture, very deteriorated. The most striking thing is still the tower, which had a huge iron bell, whose tolling called for the endowment of slaves, dispersed in the more than 1600 hectares that made up the heritage.

Thanks Jaap,...just finished the story after your visit ;-)
17 months ago. | Permalink

A sad background story, but it must have looked magnificent in its time. The laundry gives a more "down to earth" touch.
17 months ago. | Permalink

Now a daily living imposes itself to a past hard to forget
Circumstances change but life goes on
Beautiful images and splendid text, Berny
17 months ago. Edited 17 months ago. | Permalink

This must have been a very impressive building at one time............and now you've captured it in all it's fading glory. It's good to see that it's providing a home for some people (who may not otherwise have one). The closer view of the tower in the PiP is excellent.