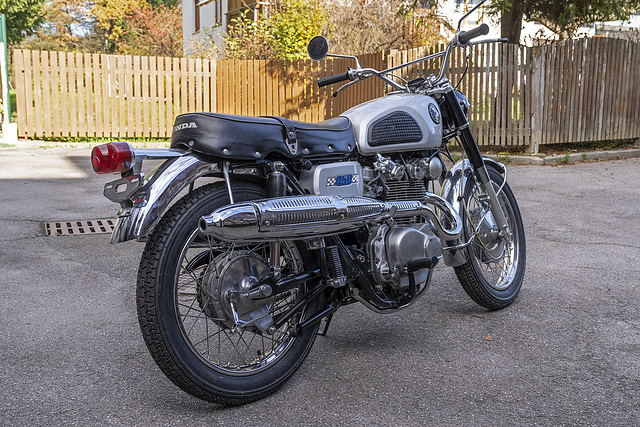 And this is my own bike, built 1967, which just received registration as historic motorcycle. During 1966/67 stocks of the CB450-K0 ("Black Bomber") were building up in US showrooms. To assist sales of the now fairly dull looking black only design Honda produced a special kit of parts for dealers to convert new bikes to this special "D"-model, the "D" stands for "Desert Scrambler". Consisting of tank, seat, mudguards, upswept exhausts and other parts to what later become a "CL"-scrambler style. This was the strongest 2-cylinder bike at that time with 444 ccm and 43 HP, DOHC, aircooled 4-stroke engine, 187 kg and 180 km/h. I imported the bike from Italy and only exchanged wear parts and the exhaust (which I bought in England), it has the original painting and chrome. About 30 exemplars exist worldwide. See 1st PiP for front view! The 2nd and 3rd PiP's show the same type in an English Honda museum.

I think so, always searched for this rare scambler model! - Thanks Marko!
2 years ago. | Permalink

Really? That's a great bike too!
2 years ago. | Permalink
Boro club
has replied to Berny club

Thanks Richard! But it's not a Black Bomber, similar, but actually the model CB450D, a further development from Black Bomber.
2 years ago. | Permalink

Thanks a lot José!
2 years ago. Translate | Permalink

The old Honda is really cool.
2 years ago. | Permalink

Motorbikes are not usually my thing...........but even I can see this one is something special.
2 years ago. | Permalink
Berny club
has replied to Keith Burton club

I'm more working on the bikes than driving ;-)
Many thanks Keith!
2 years ago. | Permalink

Fabulous looking old bike Berny … you're a lucky guy for sure. I'd have given the front view a star too, but for some reason ipernity won't let me! ;)
2 years ago. | Permalink
Berny club
has replied to autofantasia club

Thank you so much Paul,...now the other one should be open to public ;-))
2 years ago. | Permalink