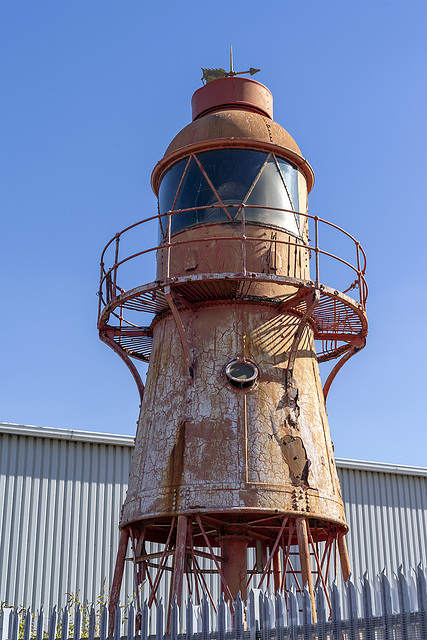 The original Shornemead Lighthouse, one of the last actual lighthouses to be built on the River Thames, was built in 1913 to mark the muddy banks on a meander in the Thames, just East of Gravesend and South of Tilbury Fort. The skeletal Lighthouse was designed by Sir Thomas Matthews for Trinity House, who operated the light until the Port of London Authority assumed responsibility for the Light. The metal tower was originally 14 metres high and painted red, showing a white acetylene Powered light from a circular lantern; this was turned on and off automatically by a sun-valve at day and night. The Lighthouse was cut off of it's base and 3 metres of lower part of the tower had to be removed in order for the rest of it to be salvaged from the concrete platform on which it stood. Since the tower's removal, it has been stored at the Port of London Authority's depot at Denton Wharf, Gravesend, presumably where it will stay until a new use for it can be found.

Bernhard Sonderhuesken, micritter, Gudrun, RHH and 18 other people have particularly liked this photo

Beautiful details Berny.
Thank you for the note.
2 years ago. | Permalink

Faded, but still quite lovely. It looks really good in the sunshine. I hope they can find another use for it. Very nicely captured Berny.
2 years ago. | Permalink