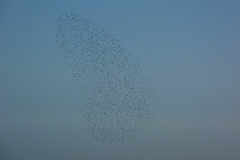 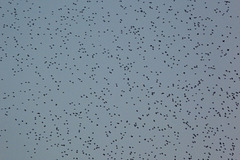 Result of a Welsh Summer

Aberdulais Falls in south West Wales in a flow condition after several days of Summer rain. The falls were used to supply power for a Forge and the building remains of this are preserved by the National Trust It is an ideal site for those with limited mobility as it is close to the Main road, so no long hikes that are usually needed to photograph waterfalls The site is served by pathways suitable for Wheelchair access and there is a Lift system to Reach the higher parts of the falls. At twenty minutes or less drive from the A465 Heads of the Valleys road, west of Merthyr the site is well worth a visit. I plan to return later in the year after winter storms to photograph the falls in full flood During the "processing" of this RAW image I found my eyes drawn to the area of the rockface just above the left hand end of the Tree Branch - and If I squint my eyes I can see a human like "Face" 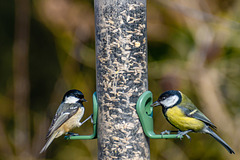 Coal and Great Tit on Feeder at RSPB Ham Wall 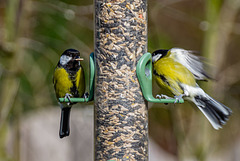 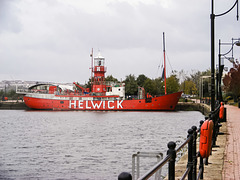 An unusual piece of "Street Art" The Helwick Lightship was for several years located in a Basin at Cardiff bay. The ship held a small restaurant/cafe. and was quite popular with both visitors and residents. The ship was removed recently due to cost implications of maintaining it's "Sea Worthiness Certificate - which it required, although it was permanently moored in a depth of water that would have, if it leaked, left the hull upright and the access planks still attached to the dock.

A View from a Train

The line runs from Pant, 3 miles North of Merthyr Tydfil, to Torpantau following part of the route of the original Brecon & Merthyr Railway which closed in 1964.

A view from Rhigos Veiwpoint

View from Rhigos Veiwpoint on the A4061 Rhigos Road between Rhigos and the old mining village of Treherbert To the Left is Craig y Llyn [Hill of the Lake] is a mountain situated to the south of the village of Rhigos on the south side of the upper Vale of Neath and north of the Rhondda Valleys in South Wales At 600m it is the highest point in the traditional county of Glamorgan, and the South Wales Valleys. The Countryside Council for Wales states that the site has been categorised as a Site of Special Interest because it supports "...two special habitat features, and is also of special interest for a plant, the water lobelia. The first habitat feature is standing water, supporting aquatic plants typical of lakes with low nutrient content. Some of these plants are not known from anywhere further south in the UK. The second is dry heath, found on the slopes above the lakes. The "lake visible is Llyn Fawr a lake in the Cynon Valley [Welsh: Cwm Cynon], South Wales, that is best known as the site of an important hoard of weapons and tools from the late Bronze Age and early Iron Age. Originally a smaller lake, it was converted into a reservoir in the early 20th century. The Llyn Fawr hoard was discovered between 1909 and 1913 during the construction of the reservoir. It contains many objects from the late Bronze Age, but also a number of iron objects, notably an iron sword of the Hallstatt type. Two other iron implements were found – a spear and a socketed sickle. Bronze items included two cauldrons and axeheads. The items appear to have been placed in the lake as votive offerings. The date of these items is uncertain because of the context of the finds, but the sword is thought to date from about 650 BC. It is the earliest iron object to have been discovered in Wales. This hoard gave its name to the Llyn Fawr Phase, which is the last phase of the Bronze Age in Britain. To the right is The Mynydd Bwllfa wind farm capable of supplying electricity to 15,000 homes, a scar on the traditional landscape, yes, but better than the coal mines that proceeded them, which are now going back to nature.

View northeast from the Naughty Stone, [See PIP] at the Viewpoint Above Trefil Vilage, The highest Village in Wales Camera is actually resting on the Stone. I intend to return to this location, but will likely need to use another vehicle, as the road is challenging in mine with it's lowered suspension. You can se a drone view on YouTube here www.youtube.com/watch?v=5SgYgkhsczw that gives an ide of the area [ Not my work so all credits go to the author] 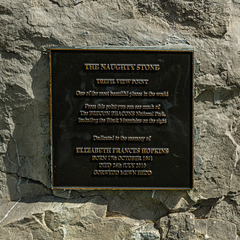 Views from the Naughty Stone 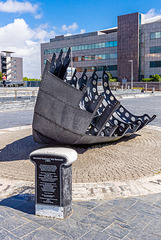 A Thoughtful Sculpture [Image One]

In pride of place in front of the Senedd Building, in Cardiff Bay Stands This Memorial Sculpture to those Merchant Seamen who lost their lives during Two World Wars. The appearance of a Hulk of a Ship showing its structure is a poignant reminder of all the ships from the port of Cardiff that sailed away to never return. I passed by the sculpture many times and never saw the most impressively part of the work that really brought home its purpose … This is seen in the second image in this set and Linked as a PIP 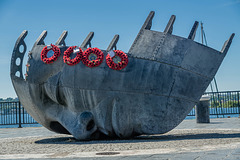 The first image of this set shows this sculpture from the Bay side, and shows the sunken hulk of a ship to remind of the losses of war. When you walk around to the side of the Senedd or Parliament Building, the view, which is what the Members of the Parliament see as the leave the building, changes to a human face to show the real losses of the War, the Merchant Seamen that manned the ships …

Clouds over the Black Mountains

Somewhat "Angry Sky" over the Black Mountains in Northern Gwent. Image taken from Keepers Pond The Keeper’s Pond, also known as Pen-ffordd-goch Pond or the Forge Pond, is situated near Pwll Du, on the hill above Blaenavon. The pond was built in the early 19th century to provide water for Garnddyrys Forge, which started production in about 1817. The forge was dismantled during the 1860s and whilst the pond no longer fulfilled an industrial purpose, it rapidly became a local beauty spot. It also acquired the name Keeper’s Pond because the gamekeeper of the grouse moors lived in a cottage nearby. www.visitblaenavon.co.uk/en/VisitBlaenavon/ThingsToDo/KeepersPond.aspx 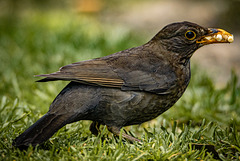