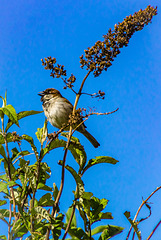 Young Male House Sparrow sings from the top of a Budlia Bush during November. This may be practice for next spring's breeding season, or more likely an attempt to claim ownership of this perch 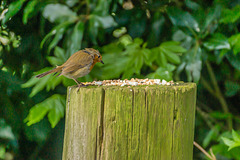 Robin showing signs of the hard times due to bringing up chicks, takes a welcome break to stock up on high protein seeds and Suet

View north towards the County Town of Breconshire, Brecon along the A470 Trunk Road. The ground Rising to the Right is the "Beacon" Y Gyrn which rises to a height of 619M. The A470 is a major tourist road and is dotted with many Lay-Bys, which are good for views of the landscape and photography. It is also a popular road for Driving & Motorcycling, so care should be taken when Framing up a shot

View north over the Start of the Brecon Beacons The valley Leads to the Cathedral Town of Brecon along the A470 Road [the line of which is just visible at the far left] The ground Rising to the Right is the "Beacon" Y Gyrn which rises to a hight of 619M.

Another View from a Train

Veiw towards the Brecon Beacons over Pontsticill Reservoir, from the Station at Pontsticill

View of Roald Dahl Plass (Roald Dahl Plaza), from the barrage side entrance. The Oval-shaped plaza is named for Cardiff-born author Roald Dahl, now hosting open air fairs, festivals & music. The The copper coloured building is the Wales Millennium Centre, a venue staging theatre, opera, ballet and music shows, with bars and dining The Water tower Sculpture (known also as Torchwood tower, after it's use as the entrance to Torchwood Cardiff in the Doctor Who Spinoff TV series), is visible at the Centre of the image.

Spring Sunshine over NAA Morgan's Pool Although this pool looks like a place that has been a serene area for many years it is actually quite new, This and it's nearby pool Woodstock are both Man made in the last fifty years. I can remember visiting the pool to fish in the 1980's when the banks were more like looking at a building site. I no no longer fish but still visit occasionally just for the calm and solitude

View North West from the road climbing to the "Tumble" and the Keepers Pond, [Pen-Ffordd-Goch], Viewpoint On the Blorange In Northern Gwent. The highest point Visable to the Right of the image is the Sugarloaf, [Y Fal], which climbs to approximately 560M but is quite accessable as Vehicle routes Climb to within a Stiff Walk from the summit, the drive however is not for those with issue with Hights, as it can appear less secure than it is Other hills that make up the Eastern Black Mountains are visible to the Left

View from The Blorenge

View South from the Road leading down from the Blorenge In Northern Gwent. to the Town of Blaenavon In the distance you can see the Severn Estuary with The North coast of the English county of Somerset, this is a distance of approximately 42km with the Hills in the far distance even farther away

A bay in Blue

Cardiff Bay from Low down on the Barrage slipway

This image is a panoramic view of the Bristol Channel from the holiday resort town of Porthcawl in Glamorgan, South Wales. The panorama is constructed internally by the camera, [A Sony a6000], automatically by keeping your finger on the shutter Button as you rotate the Camera. It does not have the resolution of an equivalent manually created panoramic image and the fact that is shot in JPEG means that the amount of processing latitude is limited but it is still an acceptable image for it's purpose, and at 4.67MB it's a lot more manageable that the manual .DNG Panoramic I created from similar data that weighed in at 330MB! 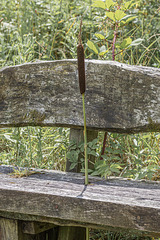 Now that could be painfull !!

Reedmace growing through a small hole in a Bench at Parc Slip Nature Reserve. On a serious note it does bring to mind the line from The Jurasic Park series of Movies "Life Finds A Way" There is no photo trickery in this image, the image is completely as shot (excepting mild processing of Light and Colour)

Lesser Black Backed Gull at Cosmeston Lakes Country Park, Penarth, (Cardiff), South Wales. Not a rare bird and quite unloved by most as it lives on a rubish tip and eats anything it can get but can be a stunning sight in good light. Image aspect is 16:9 so is ideal for use as a wallpaper for many computers and even TVs