Not all roses are red, not all rosés are dry. Two and a Half Dogs Waiting for the rain break This is not a guided city tour „Souriez ..... vous êtes peut-être photographié“ Cycling through the city She doesn't handle the traffic, she's conducting i… Nightmare on Time Square I think the sharpness is just right on the left si… The draughtsman Dog in Manhattan Another Dog in Manhattan Saint Tropez Saint Tropez - Café Sénéquier Bahnhof Friedrichstraße Berlin Hauptbahnhof Ausfahrt S7 Richtung Potsdam Under the Hudson River Do you think it's comfortable? :-) München - Scheidplatz ƎƆИA⅃UꓭMA City of mirrors One man brass band No Squirrel ;-) SoHo, Manhattan Subway Life Music Into the Park Into the Park Into the Park Into the Park Into the Park Tickets for Chicago? The revenue of the common photos Time Square - Summertime 7th Ave / W 48th St NYPD Motorcycle Police Preparation before opening Grand Central Terminal Grand Central Terminal "When I grow up, I'm gonna be a police car." :-) ♫ ♫ Sous le ciel de Paris ♫ ♫ Station du métro de Paris (Franklin D. Roosevelt) 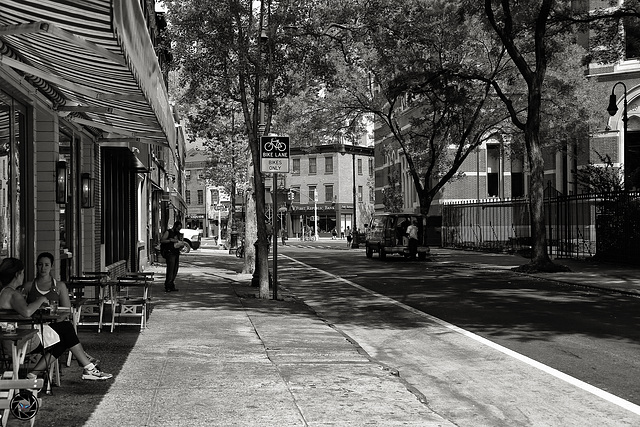 Greenwich Village often referred to by locals as simply "the Village", is a neighborhood on the west side of Manhattan, New York City, within Lower Manhattan. The name comes from Groenwijck, one of the Dutch names for the village (meaning "Green District"), which was Anglicized to Greenwich.
In the 20th century, Greenwich Village was known as an artists' haven, the Bohemian capital, the cradle of the modern LGBT (Lesbian, gay, bisexual, and transgender ) movement, and the East Coast birthplace of both the Beat and '60s counterculture movements.