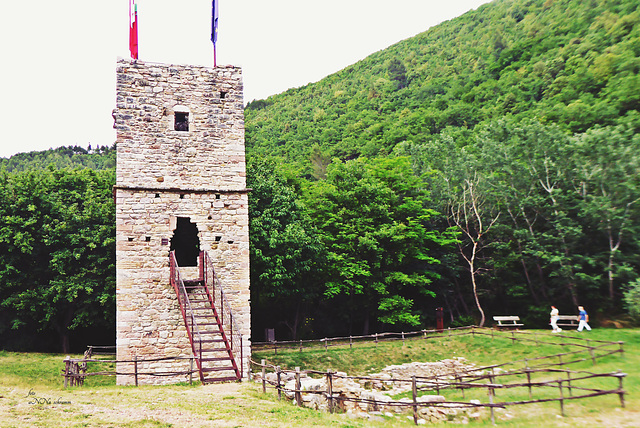 ...nel 'Bosco di San Fransco'
Located on the slopes of Mount Subasio just below Assisi, it transports us to a unique atmosphere, an enchanted place suspended in time! The Bosco di San Francesco has been part of the Italian Environment Fund since 2010: 64 hectares just outside the walls of Assisi, it was restored on the occasion of the 150th anniversary of the FAI, returning it to the city clean and arranged with paths and many small works of art at inside it and planted more than a thousand new shrubs, including two hundred new olive trees.
The Bosco is dedicated to St. Francis who in the thirteenth century lived and preached in these lands, together with his companions, giving life to the Franciscan order. This place houses the remains left by the Benedictine nuns who lived here within the ancient Benedictine complex of Santa Croce: the monastery, a hospital, a mill, a church and a bridge; to then reach, after crossing the fields, an ancient and solitary tower-factory.
The tour starts from the Basilica of San Francesco and continues in the woods, crossing the ancient Benedictine complex of Santa Croce. A narrow path crosses the wood and passes from the refreshing shade of the trees to the sudden glow of the clearing over the Tescio valley (where the Torre Annamaria stands out, brought to light by archaeological excavations) which is the canvas of the land art work called the Third Paradise donated to Fai by the master of poor art Michelangelo Pistoletto: 121 olive trees planted to form the mathematical sign of infinity.
fai-website.imgix.net/uploads/2018/10/10151012/2848_f1_BoscoSanFrancesco_05_B.pdf

YES it is a nice landscape
5 months ago. Translate | Permalink

Good description.
Thank you for this note.
5 months ago. | Permalink