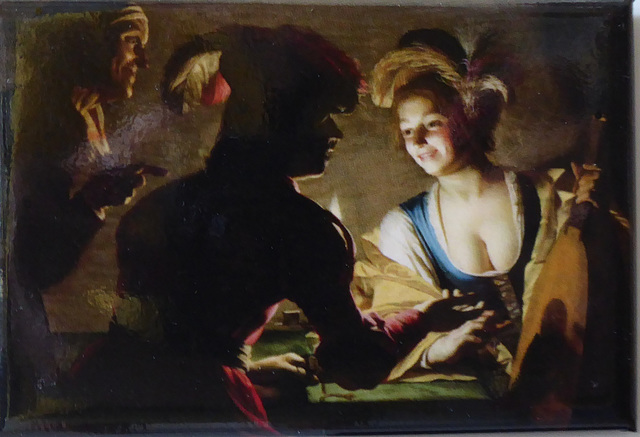 On the picture above left in the shade you can see the matchmaker, whom the young prostitute offers to the young man. The young man in the shade in front of him a candle in a candle holder. The candle holder had a bar (dt. Riegel) with which one could adjust how long the candle should burn. This is just negotiated with the young prostitute, because as long as the candle burns then the shepherd hours last... :-))) You can see his finger ist on the
The prostitutes of that time had a dress code, colours like red, green and yellow were rules, and they also had to judge according to them.

The dress codes differed by the time of the Middle Ages and from city to city. For example, prostitutes in Vienna had to wear a yellow cloth on their armpits, in Augsburg a veil with a two-finger thick green line in the middle, in Frankfurt am Main a yellow trimming (hem) and in Zurich and Bern a red cap made their low status clear. They were also required or forbidden to wear certain shoes, ribbons or veils. As a rule, the colour markings were kept in the so-called shame colours: Red, yellow or green. Since "decent" (or "decent and respectable") women were not allowed or allowed to "dress up" in the Middle Ages, prostitutes were also referred to as pretty women.
(Wiki).