Golf and Schlosshotel Münchhausen in Schwöbber 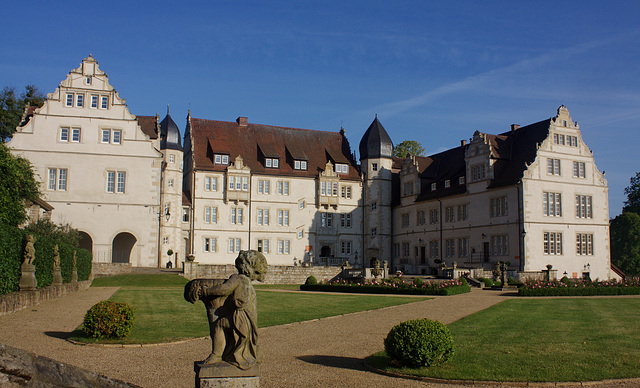 The moated Castle Schwöbber near the village Aerzen is a three winged former total moated castle with a yard itself after southeast opens: therefore, a short visit in the morning is to be recommended.

The castle is one of the most beautiful and style-purest renaissance locks of the Weser space, one of the most important examples of the style of the Weserrenaissance. (see this TAG)
The castle was established from approximately 1570. Owner was known as one drives up
of the baron Münchhausen (literary known by: The Adventures of Baron Munchausen)

Today here you can stay in the hotel http://www.schlosshotel-muenchhausen.com
The surroundings are hilly and rural with a lot of mixed forests. For an active vacation I recommend start with the purchase of a map. Best " Naturpark Weserbergland " ISBN 3-89435-621-9

As a fief of the Hamelin Boniface monastery the place came 1510 in the possession of the family of Muenchausen. The older Hilmar von Muenchhausen, who had brought it as an imperial mercenary leader in the war against the northern Netherlands and Danish Swedish War of wealth, devoted himself since the 1560ger years to expand and manage his lands. Besides Rinteln, Aerzen, Apelern, Lauenau or Leitzkau in Saxony-Anhalt was one of the estates The shown Schwöbber. A Castle that makes the center wing of the facility was built from 1570th Architect of Hamelin Cord Tönnis, the Hilmar had been previously employed in Rinteln. For the completion to 1576 caused the death of the owner, his widow Lucy of Reden

You will find other castels in the surround: http://www.burgen-und-schloesser.net/293/umgebung.htm On more botanical interest i recommend Parque and Castle Bad Pyrmont in regard of historical conservation and total i recommend Hämelschenburg.