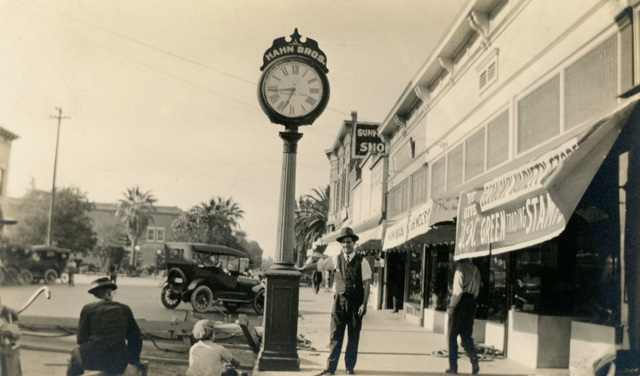 A Vintage Photos Theme Park photo for the theme of our ad age—a photo that includes advertising signs.

A man stands next to a "Hahn Bros." street clock, and a sign on one of the storefronts behind the man looks like it says "Hahn Bros. Jewelry." The sign above the store on the right advertises an "Economy Variety Store" and "We Give S&H Green Stamps."

This is an unused real photo postcard with an Azo stamp box (four corner triangles pointing up) on the other side that suggests a date that may be as early as 1904 to 1918. There's no indication where the photo was taken, but the palm trees along the street in the distance may indicate a location in California or Florida.

See also a rotated version that corrects the tilt of the photo. 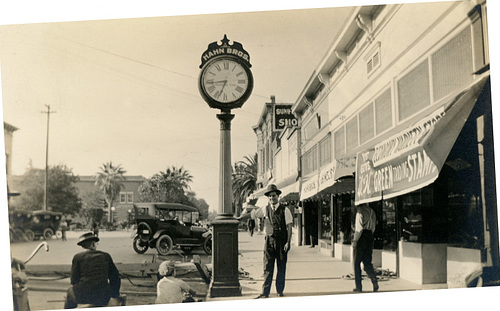 Deborah Lundbech club
Wow - I didn't know S&H stamps had been around that long!
I really love those old street clocks. We're lucky in Bristol to have a regularly kept clock tower (with bell) but I'd still love to see those old post clocks back on the streets of America!
7 weeks ago. Edited 7 weeks ago. | Permalink
Alan Mays club has replied to Deborah Lundbech club
I was surprised to discover that S&H stamps date back to 1896 according to Wikipedia. We have post clocks in some of the towns in south central Pennsylvania, but not as many as there used to be.
7 weeks ago. | Permalink

RicksPics club
What a great scene. I don't recall ever seeing a post clock in the US. Ads everywhere!
6 weeks ago. Edited 6 weeks ago. | Permalink