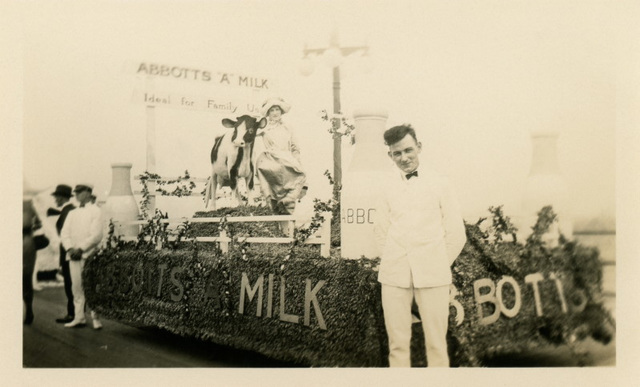 A Vintage Photos Theme Park photo for the theme of milkmen or milkwomen (or anything else related to milk, dairies, or home food delivery).

Sign on parade float: "Abbotts 'A' Milk. Ideal for Family Use."

A milkman in a white uniform with a bowtie stands in front of a parade float advertising Abbotts "A" Milk from Abbotts Alderney Dairies, which operated in New Jersey and in Philadelphia, Pennsylvania. Perhaps the "A" referred to the Alderney breed of dairy cattle, but I haven't confirmed that.

I wish that this snapshot was a bit clearer so that the giant milk bottles on the four corners of the float were easier to see. There's also a milkmaid and a fake cow on the other end of the float.

The "Ideal for Family Use" slogan that appears on the sign also shows up in a number of Abbotts "A" Milk ads from 1922, so it's possible that the photo dates to that year.

For other milkman photos, see Milkman, Horse, and Wagon for Borden's Condensed Milk, Bottled Milk, and Cream and Season's Greetings from Your Rutter's Milkman (Detail). 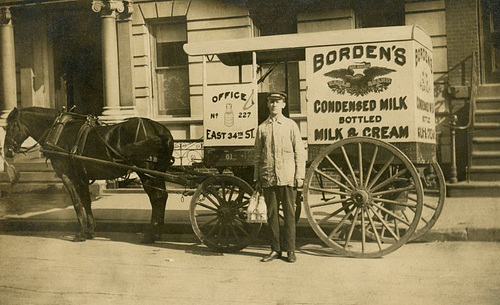 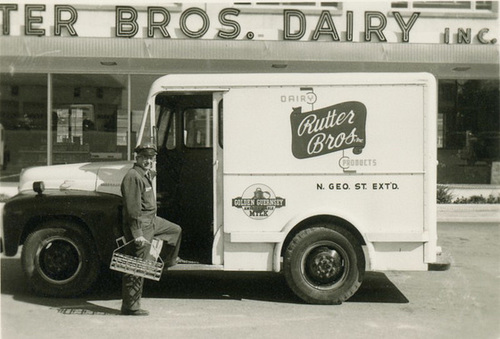 Deborah Lundbech club
Wow, Alan, great collection of milk themed photos!
That parade photo is great - just imagine standing on the sidelines and cheering on the milk float! They did a great job creating an interesting, promotional one.
2 months ago. | Permalink

RicksPics club
Wow, indeed. I struck out looking for any suitable photo for this week's theme. These are all winners.
2 months ago. | Permalink