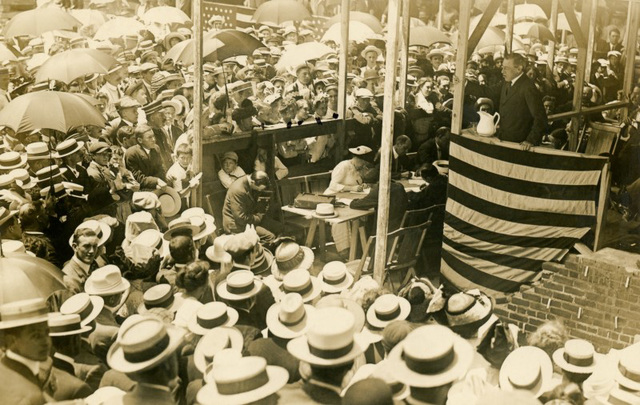 A crowds photo for the Vintage Photos Theme Park.

Printed on the back of this real photo postcard: "Real photograph printed from negative by Harper B. Smith, 1637 Boardwalk, Atlantic City, N.J."

Dear Dot - Does thee see the girls that are marked—they are our bunch & also "The Man of the Hour"? (Woodrow)? People are naming their kiddies after him thee know.

Tell Agnes Schultz [that the] girls got homesick and went home and I am working here at one of the best places if not the best.

Spent one week boarding & "doing it" as that crazy song says.

Met a very nice girl from Wilmington whom I like very much.

Hetty points out the "girls that are marked" on the photo (mouse over the image above for an enlargement showing the marks). I'm not sure whether these are the same girls who left after getting homesick.

That's Woodrow Wilson, governor of New Jersey from 1911 to 1913 and president of the United States from 1913 to 1921, who's addressing the audience in this photo (mouse over the image for a close-up of Wilson). Although I haven't been able to confirm it, the unfinished brick wall on the lower right-hand side suggests to me that this may be a view of Wilson's speech during the laying of the cornerstone for the new YMCA building (now the John Brooks Recovery Center) on Pacific Avenue in Atlantic City, New Jersey, on July 10, 1912. Wilson appeared in front of a crowd of about 5,000 on that day in one of his first appearances after receiving the Democratic nomination for president on July 2 (see "Wilson at Cornerstone Laying," Reading Eagle [Reading, Pa.], July 10, 1912, p. 9).

As Hetty alluded to in her message, Wilson used "The Man of the Hour" as his slogan when he ran for president in 1912, and he was apparently popular enough that some parents did name their children after him. One famous namesake, for instance, was Woodrow Wison "Woody" Guthrie, who was born on July 14, 1912, and grew up to become a famous folksinger and composer of songs like "This Land Is Your Land."

Why does Hetty use "thee" instead of "you" in her message? As it turns out, she was writing to Dorothy "Dotty" Passmore, a woman who was a member of the Quakers (or Friends), a religious group that used "thee" as a pronoun at the time. It's likely that Hetty was a Quaker as well.

The Friends Journal: Quaker Thought and Life Today, Nov. 1, 1964, noted the death of Dorothy's husband on June 21 of that year. He was a member of the Sadsbury Friends Meeting, a Quaker church that still exists today. His wife, who presumably was also a member of the church, had passed away a month earlier on May 19, 1964, as reported in an obituary that appeared in the New York Times.

I entirely agree with June.
5 years ago. Translate | Permalink

What an amazing card! I love the close-ups you provided. Thanks!
4 years ago. | Permalink