Out for a Drive at the Morrow-Umatilla County Fair, Oregon, ca. 1912 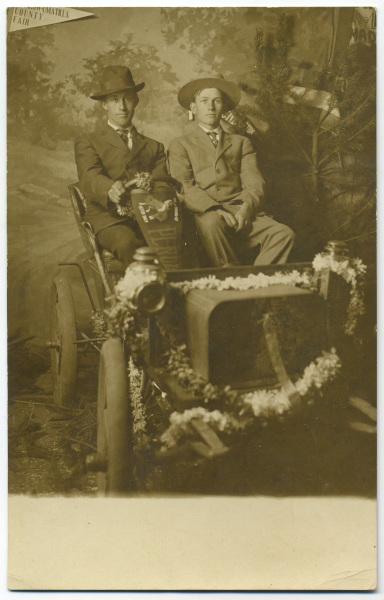 A flowers or trees photo for the Vintage Photos Theme Park.

This is a real photo postcard of two men sitting in an automobile decorated with flowers. The painted backdrop behind them depicts a tree-lined country road.

The sign in the upper left-hand corner of the photo appears to be one for the "Morrow-Umatilla County Fair." This is now the Umatilla County Fair, which is still held in Hermiston, Umatilla County, Oregon. According to the fair's Web site (archived version), Morrow and Umatilla counties both sponsored the fair for its first year in 1912. Beginning in 1913, however, Umatilla County was the sole sponsor. If this is correct, then this postcard probably dates to 1912.

The banner that the man on the left is holding says, "The Round-Up, Let 'er Buck, Pendleton," which refers to the Pendleton Round-Up, a rodeo that's been held in nearby Pendleton, Oregon, since 1910. Another Pendleton banner is partially visible on the wall behind the man on the right.