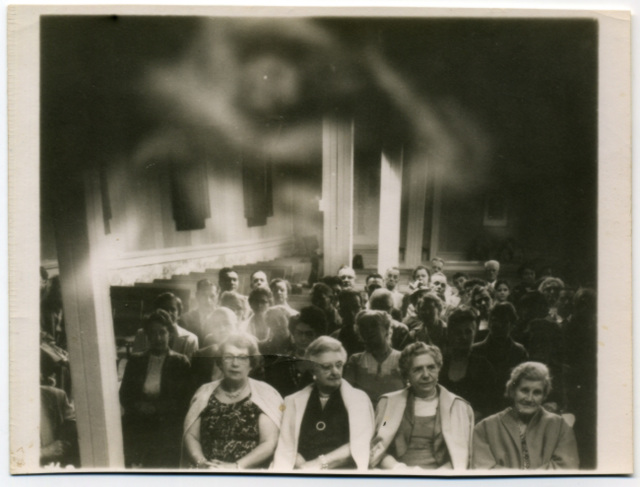 Something "mysterious" for the the Vintage Photos Theme Park.

This photo was identified as a "spirit photograph" when I bought it at an antique co-op in 1994. Handwritten on the back of the photo is the following: "Camp Silver Bell, Mountain Springs Hotel, Ephrata, Pa."

Camp Silver Belle was a Spiritualist group founded by Ethel Post-Parrish, a medium whose Indian spirit guide was named Silver Belle. The group held lectures and meetings at the Mountain Springs Hotel in Ephrata, Pa., and published a schedule of programs as late as 1976 (see Silver Belle Presents Lecturers, Teachers, World-Famous Psychics, 1976). Eventually, however, the group became inactive, and the hotel fell into disrepair.

Today, the facade of the old hotel remains, but the rest of the hotel site was demolished in 2004 to make way for a Hampton Inn hotel and an Applebee's restaurant.

So what is that strange haziness hovering above the audience? An ectoplasmic manifestation from another spiritual realm? Hokum conjured up by sleight of hand and camera? Or just an odd yet coincidental defect in the film or developing?

Christina Sonnenschein, Smiley Derleth, lisabee73 and 2 other people have particularly liked this photo

/me shivers...
7 years ago. Translate | Permalink