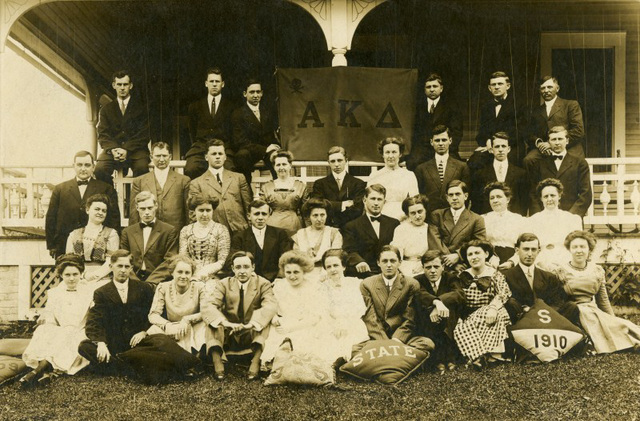 A front porch photo for the Vintage Photos Theme Park.

A group of 36 men and women assembled on and in front of the porch of a fraternity house. I found this photo at an antique mall in Pennsylvania, and judging by the "AKD" banner, the "State" pillow, and the "S[tate] 1910" pillow, this is probably the same men's social fraternity that William Raimond Baird described in Baird's Manual of American College Fraternities, 7th ed. (New York: College Fraternity Publishing, 1912), p. 572:

"Alpha Kappa Delta--Organized May 4, 1909, at Pennsylvania State College [now Pennsylvania State University]. The membership is about 50. The badge is an oblong shield displaying the letters forming the society's name in the center in vertical order. The colors are orange and blue. It rents a house."

Perhaps that's the house that the fraternity was renting. The AKD banner on the porch, interestingly enough, includes a skull and crossbones in its upper left-hand corner. And who are the young and middle-aged women in the photo? Girlfriends and chaperones? Students and profs?

Today, Alpha Kappa Delta is the name of a sociology honor society founded in 1920. It would be interesting to know, however, what happened to this fraternity in the decade after this photo was taken.

So very interesting to see all those poeple.. what was they life, this is the eternal question when one look at old pictures... there are strange string all over the background, they give a strange atmopshre
6 years ago. | Permalink
Alan Mays club
has replied to Nylonbleu

Thanks, I always wonder about the people in old photos, too--what was the occasion, what were they thinking, what were their lives like? I noticed the string in this photo, too, but I'm not sure why it's there.
6 years ago. | Permalink