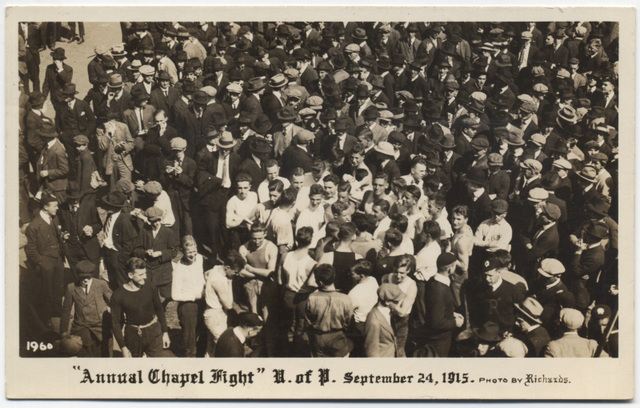 Posted to the Vintage Photos Theme Park on the way "back to school."

For a close-up of the students in the middle of the crowd, mouse over the image above or select the thumbnail image below..

The "Chapel Fight" (or "Chapel Rush") was one of a number of traditional male student competitions that took place at the University of Pennsylvania and many other American colleges and universities in the late nineteenth and early twentieth centuries. The competitions pitted one class against another, and similar annual events at Penn included a "Bowl Fight," "Poster Fight," and "Push Ball Fight."

It's not obvious from the photo what the goal of the Chapel Fight on Friday, September 24, 1915, was. Some of the students at the center of the fray are wearing white undershirts and seem to be missing their hats, coats, and outer shirts, so perhaps tearing off clothes was one way to win the contest, as it apparently was in 1909 (see account quoted below). Also visible in the photograph are students wearing "beanies," hats that freshmen were required to wear.

Students fought hard to defend the honor of their classes, and injuries resulted from some of the scraps. Student fights came to a tragic end at Penn when one student was killed and several were injured during the Bowl Fight of 1916.

"The university opened September 24, but no regular classes were held until September 27. Friday morning [October 1] immediately after chapel exercises, the annual Chapel Rush between the sophomores and freshmen took place. The freshmen won the first half of the fight, touching the door on the H[o]uston Club, which was guarded by the sophomores, in less time than any former class. The second half of the fight was in favor of the sophomores, the freshmen being successful in tearing the clothes off the president of the second year class in a limited time. On the Thursday night previous, the Poster Fight took place and the freshmen accomplished a victory contrary to precedent by tearing the sophomore poster off the rear door of College Hall."
Suggested groups:
Comments