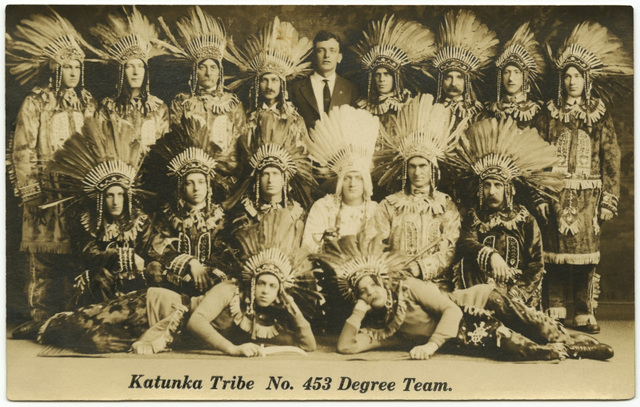 Posted to the Vintage Photos Theme Park group as a "strange clothing" photo.

This real photo postcard shows a group of men who belonged to "Katunka Tribe No. 453," which was the York, Pa., chapter of the Improved Order of Red Men, or IORM for short. The York chapter no longer exists but the national group is still around (despite the fact that "Red Men" is now considered an offensive term for Native Americans) and calls itself "America's Oldest Fraternal Organization" on its Web site.

When you realize that none of the men in this photo were Native Americans, it seems awfully strange--at least from our modern perspective nearly a century later--that they dressed in Native American garb (however inauthentic their interpretation of the clothing may have been) for their group ceremonies and rituals.

In case you're interested in additional information, Blake Stough discussed the history and controversial aspects of the York IORM group in his article Politically Incorrect or Not--Still A Part of York County History on the Preserving York blog (the article included this photo with my permission).

the only man in real strange clothing is, of course, the man dressed in a "normal" suit, because it´s the uncommon that´s odd! :-)
7 years ago. | Permalink
Alan Mays club
has replied to vfm4

Ha ha, yes, I think you're right! Maybe he didn't get the memo about what to wear. 8-) And I noticed also that there are two men in somewhat lighter/whiter outfits (one of whom is directly in front of the man in the suit). I'm not sure if that signifies that they're leaders or initiates or something else.
7 years ago. | Permalink