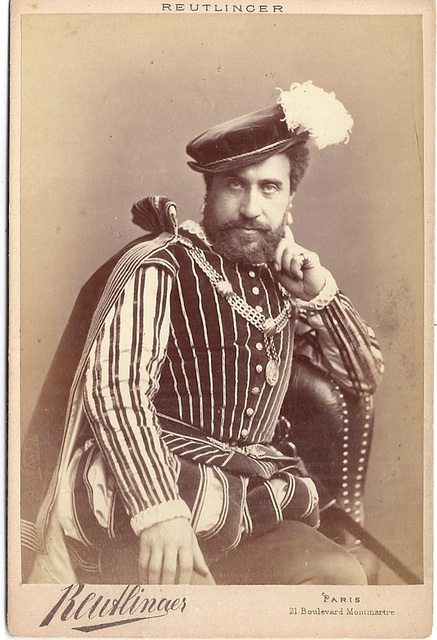 as De Nevers in "Le Huguenots'" by Meyerbeer

JEAN-BAPTISTE FAURE (15 January 1830 – 9 November 1914)French operatic baritone
Faure was born in Moulins. A choirboy in his youth, he entered the Paris Conservatory in 1851 and made his operatic debut the following year at the Opéra-Comique, as Pygmalion in Victor Massé's Galathée. He remained at the Opéra-Comique for over seven years, singing baritone roles such as Max in Adolphe Adam's Le chalet and Michel in Thomas's Le caïd. During this time he also created the Marquis d'Erigny in Auber's Manon Lescaut (1856) and Hoël in Meyerbeer's Le pardon de Ploërmel (1859; later known as Dinorah), among seven premieres at that house.
He made his debut at the Royal Opera House, London, in 1860 as Hoël, and at the Paris Opera in 1861. He would sing at the Opera every season until 1869 and then again in 1872-76 and 1878. In addition, he continued to perform off and on in London until 1877 at venues such as Her Majesty's Theatre and the Theatre Royal, Drury Lane.
Among the many operas in which he appeared in Paris were Wolfgang Amadeus Mozart's Don Giovanni as well as L'étoile du nord, Les Huguenots and La favorite.
He also made history by creating several important operatic roles written by such prominent composers as Giacomo Meyerbeer, Giuseppe Verdi and Ambroise Thomas. They included the leading baritone parts in L'Africaine, Don Carlos and Hamlet (in 1865, 1867, and 1868 respectively).
His last stage appearances are recorded as taking place in Marseilles and Vichy in 1886.
CC BY 3.0 OperaMania Jean Baptiste Faure by Reutlinger