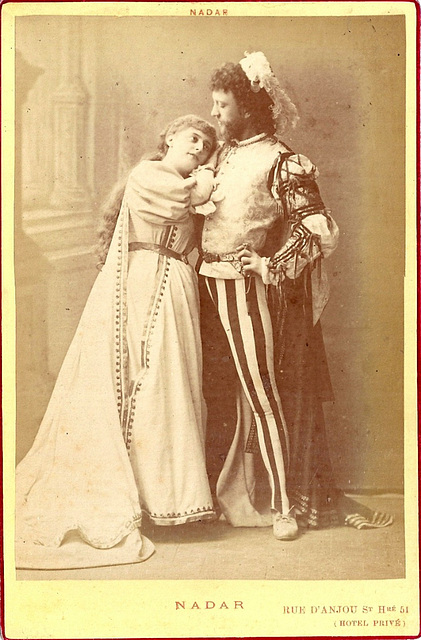 Debut 23 February 1866 as Duc de Valberg in "L'Ambassadrice" by Auber.

She studied in Paris and made her début in 1867 at the Opéra-Comique, as Alice in the first performance of Jules Massenet's "La grand’tante". In 1870 she appeared at La Monnaie as Violetta, the role of her début at Covent Garden in 1874, and in 1878 at the Théâtre Ventadour as Juliet in Victor Capoul's "Les amants". She returned in 1879 as Ophelia (Hamlet). The same year she appeared at the Paris Opéra as Marguerite and in 1880 she sang Zerlina and Ophelia there. At Monte Carlo in 1883 she sang Susanna, Philine (Mignon), Marguerite, Victor Massé's Galatea and Rose in Aimé Maillart's Dragons de Villars. In 1884 she created the title role of Massenet's "Manon" at the Opéra-Comique.
CC BY 3.0 OperaMania Marie Heilbronn & Paul L'Herie by Nadar