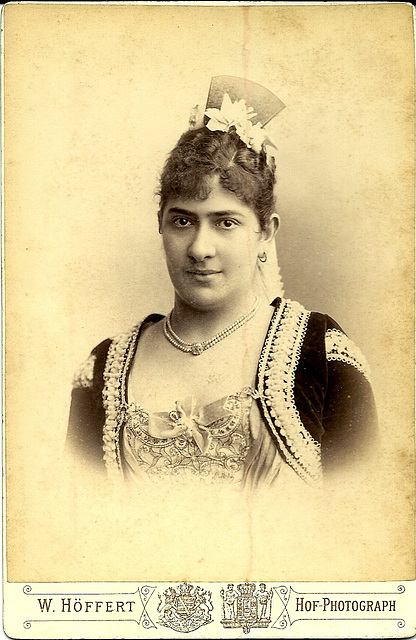 possibly as Carmen or Rosina

Studied with her mother, Marie Andriessen-von Lingke, who was a voice teacher at the Vienna Conservatory. Originally a mezzo-soprano or contralto .She began her career as an operetta singer, making her début as Anna in von Suppé’s “ Flotte Bursche” at the Vienna Carl-Theater. She continued her operetta career in Munich, Cologne, Dresden and Nürnberg . In 1882 she joined Angelo Neumann’s touring Wagner company, and toured for 2 seasons .Her operatic début was as Aida in Verdi’s “Aida” in Leipzig in 1884, She stayed at Leipzig until 1890, afterwards appearing at the Cologne and Frankfurt operas, Bayreuth (as Brangäne), Berlin and Salzburg, where she sang the Countess in Mozart’s Le Nozze di Figaro at the Mozart "centenary" festival of 1891. Apparently quite versatile, her repertoire included Santuzza, as well as Meyerbeer’s Valentine and Sélika, and the title role in Gluck’s Armide. In 1892 she ventured away from Germany to London, where she sang Fricka in Das Rheingold and the Die Walküre Brünnhilde at Covent Garden. Her operatic career was pretty much over by the turn of the twentieth century. . Married three times, it was the last husband, the bass Paul Greeff (1854 – 1923), whose name she finally and permanently adopted as her own.
CC BY 3.0 OperaMania Pelagrie Greef-Andriessen by Hoffert