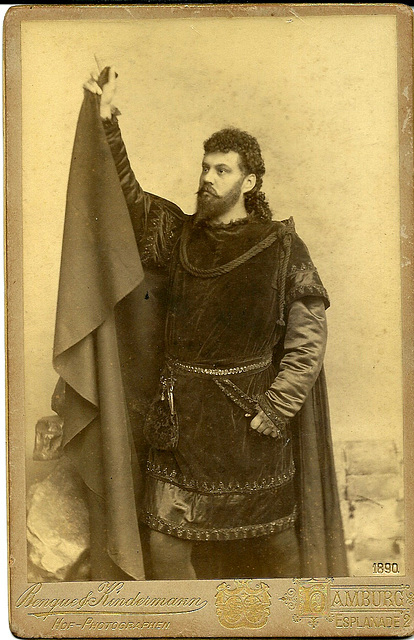 as Asrael in "Asrael" by Franchetti

He was the son of an elementary school teacher and initially pursued a military career. In 1879 he was, however, granted leave to form his voice by the military. He studied singing with August Stoll, Johannes Ress, J.N Fuchs and Mampe-Banigg in Vienna. While Studying he sang as a chorister at the Vienna Court Opera. He was admitted in 1883 as a heroic tenor in the ensemble of the house where he sang, Eleazar in "La Juive 'by Halévy, Vasco in “ Africaine ' by Meyerbeer and as Lohengrin. In “Lohengrin” by Wagner He remained at the Vienna Court Opera until 1890, from 1890-92 he was at the Municipal Theatre (Opera House) Hamburg (debut as Lohengrin) and 1892-95 at the Court Opera of Dresden, where in 1892 he sang Dietrich von Ber in the premiere of the opera 'Herrat' by Felix Draeseke. 1895-97 he was a member of the Opera House of Breslau, 1897-98 at the Municipal Theatre of Nuremberg, 1898-1908 at the Court Theatre of Braunschweig. He gave guest performances at Germany's leading theaters and then ended his career. . He also an established concert singer.,His stage repertoire included such roles as Tannhäuser, Lohengrin, by Wagner, Vasco da Gama in 'L'Africaine' by Meyerbeer , Jean de Leyde in the 'Prophet' by Meyerbeer and Eleazar in "La Juive ' by Halevy.
CC BY 3.0 OperaMania Leon Gritzinger by Benque & Kindermann