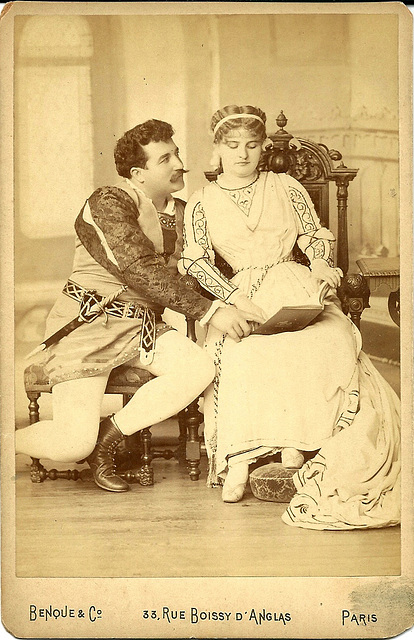 CAROLINE SALLA
(Caroline Louise de Septavaux )
1852- ???
French Soprano
Daughter of a former Secretary of GuizotIn 1874-1875 she had an engagement at the Monnaie Opera in Brussels, in 1876 at the Théâtre Gaîté in Paris and in 1877 she was engaged by the Mapleson Opera Company and performed e.g. in Dublin. In 1877 she created the rôle of Hélène in “Le timbre d’argent” by Saint-Saëns.
In 1878 she was heard at the Hofoper in Vienna and in 1882 she made her debut at the Grand Opera Paris creating the role of Francesca in the première of “Françoise de Rimini” by Ambroise Thomas. In 1886 she sang at the Opéra-Comique where in 1887 she created the rôle of Proserpine in the première of the eponymous opera by Saint-Saëns. Around the year 1890 she retired from the stage because of her marriage

As a young man of very poor ancestry he came to Paris looking for work. When he worked as an errand boy for a merchant his voice was discovered and with financial help he was able to study at the Conservatoire National de Paris. In 1876 he finished his vocal studies by winning the "Prix du Conservatoire". After that he was immediately engaged by the Grand-Opéra, where in 1878 he made his debut as Arnold in Rossini's "Guillaume Tell". Here he created the role of Manoël at the première in Gounod's "Le Tribut de Zamora" (1881) and the role of Paolo at the première of "Françoise de Rimini" by Ambroise Thomas (1882). He was widely admired for the balanced beauty of his tenor voice and the dramatic force of his performance. After a hunting accident he ended his career at the Grand-Opéra in 1888. The season 1889/90 he was engaged at Brussels at "The Théâtre de la Monnaie" , where he created the role of Mathô at the première of Ernest Reyer's opera "Salammbô". The season 1890/91 he was engaged at the Opéra of Marseille and the following years he was engaged by various French provincial theaters.
CC BY 3.0 OperaMania Henry Sellier & Caroline Salla by Benque