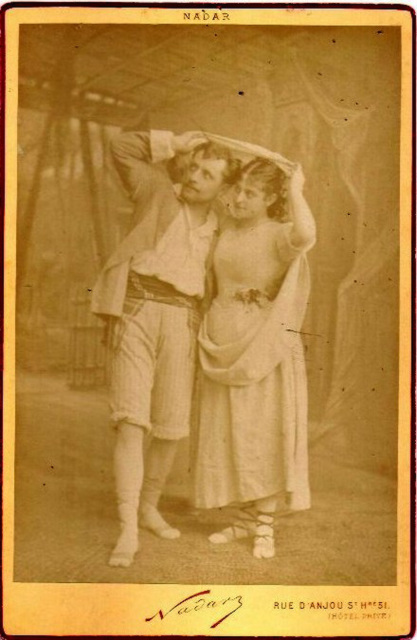 He began his studies in 1859 at the Conservatoire of Paris . He debuted in 1861 at the Opéra-Comique Paris as Daniel in 'Le chalet' of Adam. By 1870, he remained at the Opéra-Comique as principal tenor until the outbreak of the Franco-Prussian war in 1870 .during which he sought asylum in England , There he joined the Mapelson Company at Drury Lane , making his debut as Faust in Gounod's "'Faust " then 1871-75 at the Italian Opera London At London he appeared at Covent Garden for the first time in 1877 , as Fra Diavolo . Lionel 'Marta" , Faust , Elvino ,and Ernesto.With Mapelson he went to the USA where he was regular visitor until 1884 , again at the New York Metropolitan Opera 1891-1892 ; He made his debut there as Gounod's Faust and sang seven roles: the Edgardo in "Lucia di Lammermoor ', in Wilhelm Meister' Mignon 'of A.Thomas, Count Almaviva in" The Barber of Sevbilla', the Alfredo in "La Traviata 'Tybalt in' Romeo et Juliette 'by Gounod, the Enzo in "La Gioconda" by Ponchielli and worked among others in 1891 in the Metropolitan premiere of Verdi's' Othello' as Cassio with. In the years 1892-97 he lived as a singing teacher in New York; then he became a director of the Grand Opera of Paris. In 1905 he gave up this activity.
MARIE HEILBRONN
( 1851- 31 March 1886).
Belgian soprano.
She studied in Paris and made her début in 1867 at the Opéra-Comique, as Alice in the first performance of Jules Massenet's "La grand’tante". In 1870 she appeared at La Monnaie as Violetta, the role of her début at Covent Garden in 1874, and in 1878 at the Théâtre Ventadour as Juliet in Victor Capoul's "Les amants". She returned in 1879 as Ophelia (Hamlet). The same year she appeared at the Paris Opéra as Marguerite and in 1880 she sang Zerlina and Ophelia there. At Monte Carlo in 1883 she sang Susanna, Philine (Mignon), Marguerite, Victor Massé's Galatea and Rose in Aimé Maillart's Dragons de Villars. In 1884 she created the title role of Massenet's "Manon" at the Opéra-Comique.