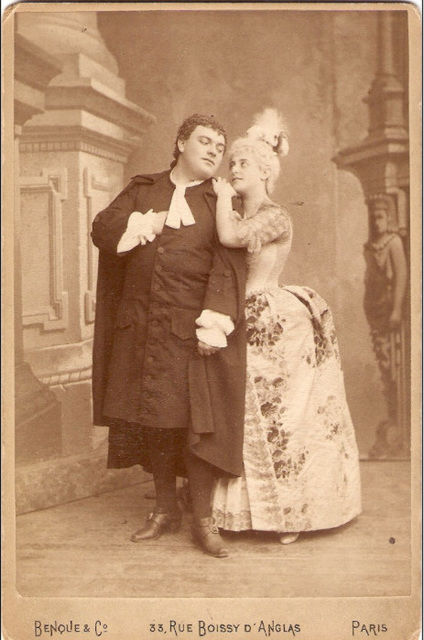 MARIE HEILBRONN
( 1851- 31 March 1886).
Belgian soprano.
She studied in Paris and made her début in 1867 at the Opéra-Comique, as Alice in the first performance of Jules Massenet's "La grand’tante". In 1870 she appeared at La Monnaie as Violetta, the role of her début at Covent Garden in 1874, and in 1878 at the Théâtre Ventadour as Juliet in Victor Capoul's "Les amants". She returned in 1879 as Ophelia (Hamlet). The same year she appeared at the Paris Opéra as Marguerite and in 1880 she sang Zerlina and Ophelia there. At Monte Carlo in 1883 she sang Susanna, Philine (Mignon), Marguerite, Victor Massé's Galatea and Rose in Aimé Maillart's Dragons de Villars. In 1884 she created the title role of Massenet's "Manon" at the Opéra-Comique.
Jean Alexandre Talazac
May 16, 1853 - December 26, 1892
FrenchTenor
Debut April 28, 1878 Lae Statue (Selim). He sang in 1879 at the premiere of the Magic Flute (Tamino) by Mozart, and la Traviata in 1886 (Rodolphe). He created in 1880 Jean de Nivelles (Jean) by Léo Delibes, 1881 les Contes d'Hoffmann (Hoffmann) by Jacques Offenbach, in 1883 Lakmé (Gérald) by Léo Delibes, January 19, 1884 Manon (Des Grieux) by Jules Massenet, in 1888 the Roi D'ys (Mylio)d'Edouard Lalo (Joseph) Romeo and Juliet (Romeo),Richard Cœur de Lion (Richard).