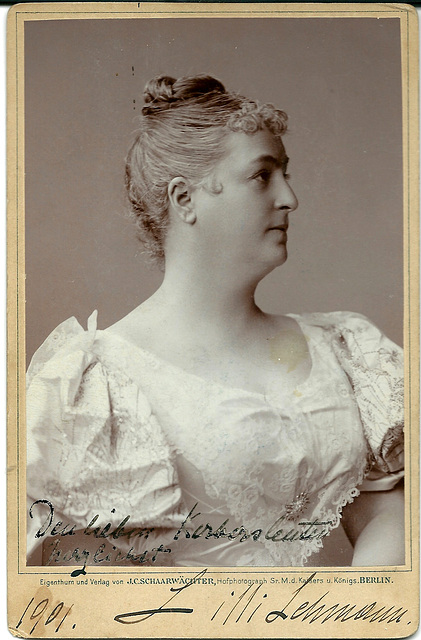 LILLI LEHMANN
(Elisabeth Maria Lehmann)
(24 November 1848-17 May 1929) German Soprano
Her father, Karl-August Lehmann, was a singer (Heldentenor) while her mother, Maria Theresia Löw was a soprano. Her first lessons were from her mother, After singing small parts on the stage, for example in Mozart's Magic Flute at Prague in 1866, and studies under Heinrich Laube in Leipzig Lehmann made her proper debut in 1870 in Berlin as a light soprano in Meyerbeer's Das Feldlager in Schlesien. She subsequently became so successful that she was appointed an Imperial Chamber Singer for life in 1876.Sang in the first Bayreuth Festival in 1876 , New York Metropolitan Opera in 1885–1899 .London's Royal Opera House, Covent Garden, in 1899 and sang in Paris and Vienna in 1903 and 1909 respectively. In 1905, she sang at the Salzburg Festival,