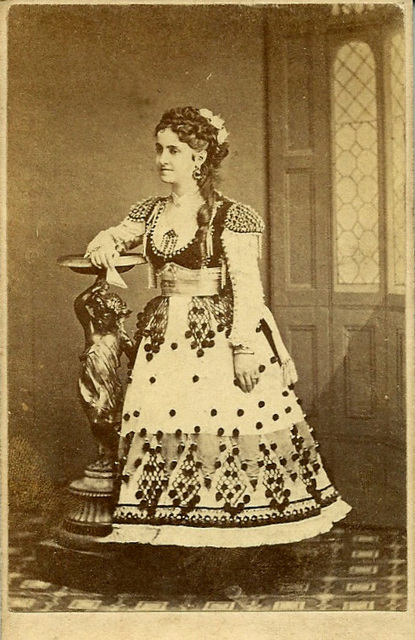 Her voice was noticed very early and she nade her first tour in America at the age of seven years and was a huge success. Studied singing in New York under the direction of Maurice Strakosch, her brother-in-law, and in 1859 she sang in New York in Lucia di Lammermoor. At Covent Garden theatre in London in 1861 where she sang la Sonnambula, her reputation was strengthened and in 1862 she was singing in Paris at the Théâtre Italien, where she soon became the star. She remained at Paris until 1870, being heard in London during the summer season. In Paris she sang the Italian Repertory, in London the french Repertory. After a long stay in America and London, Patti returned several times to Paris at the Opera (debut in 1874) and the Théâtre de la Gaîté. Then she resumed travels and successfully created, in London, in 1882, the Charles Lenepveu's Velléda. She also created Dolores of André Pollonais in Nice on February 22, 1897. She triumphed especially in a vast Italian repertoire that suited to her beautiful light soprano voice. His career lasted for fifty-six years