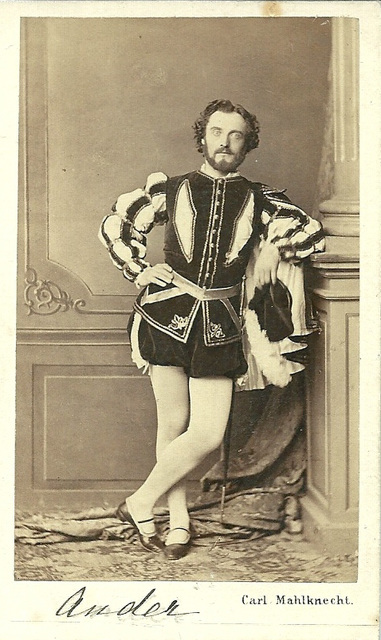 ALOIS ANDER
( Aloys Anderle )
(b. August 10 1821 in Libitz at the Doubrawa , Bohemia , d. 11 December 1864 in Wartenberg )
Austrian Tenor
Alois Ander in 1845 through the mediation of the singer Franz Wild at the Vienna Court Opera he was engaged,in the role of Alessandro Stradella in ( Flotow's opera of the same), He has since been a favorite with audiences in Vienna and remained faithful despite alluring engagement requests that were sent to him as a result of his concert tours. One of his last major roles was the Franz Grove in the world premiere of Jacques Offenbach's The Rheinnixen on 4 February 1864, Richard Wagner's hope that his first Tristan were taken from Offenbach's work.

He died in the bathroom at Wartenberg due to a mental disorder.

His singing was characterized by less heroic force and sharp pattern of expression than poetry, intimacy and artistic seriousness from which his dramatic designs lent a peculiar charm.