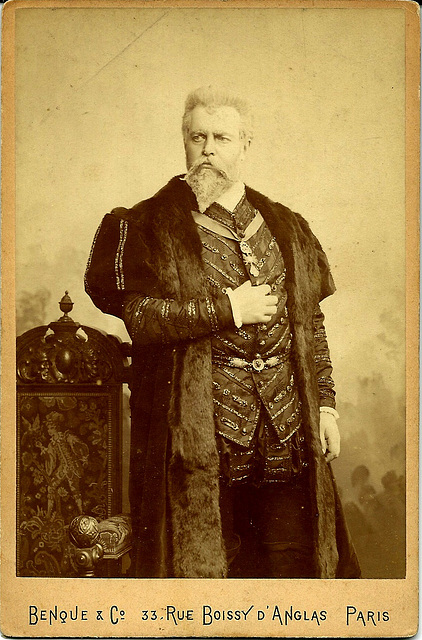 EDOUARD DE RESZKE, originally Edward, (22 December 1853 – 25 May 1917) was a Polish bass from Warsaw.
His voice studies in Italy with Giovanni Sbriglia, a leading pedagogue. Initially, he did not want to become an operatic performer but at the urging of his younger sister, Josephine (Józefina), he accepted an engagement with the Paris Opéra. He was chosen by the composer Giuseppe Verdi to make his debut in the first Paris performance of Aida on 22 April 1876, appearing under the composer's baton as the King of Egypt.

De Reszke's older brother was the renowned lyric-dramatic tenor Jean de Reszke (1850–1925), with whom he would sing often in Paris, London and New York City during the course of the next two decades. In 1887, for example, the brothers performed together in the 500th performance of Gounod's Faust at the Paris Opéra.

Josephine, Edouard and Jean's sister, also embarked on a career as an opera singer in Paris but she retired early from the stage after marrying an aristocrat while at the height of her powers. (Another sibling, Victor de Reszke, manifested more moderate talents as a vocalist.)

Between the start of 1880 and the end of 1900, Édouard de Reszke appeared on more than 300 occasions at the Royal Opera House, Covent Garden, performing a wide range of roles in French, German and Italian operas, including works by Wagner, Verdi, Rossini, Bellini, Donizetti, Ponchielli, Gounod, Meyerbeer, Flotow and Mozart.

He was a huge favourite, too, with audiences at New York's Metropolitan Opera during the same era. (His only serious bass rival at the Met and Covent Garden was the elegant French virtuoso Pol Plançon [1851–1914]; but the Frenchman, unlike de Reszke, barely touched Wagnerian opera.) He also sang in Chicago in 1891 and, in 1879–1881, at La Scala, Milan. In 1903, he retired from the stage after his once superlative voice developed technical difficulties and went into a swift decline.

De Reszke taught singing for a while in London before returning to his estate in Poland, where he was adversely affected by the outbreak of World War I in Europe in 1914. Cut off from his brother by the fighting, he died on 25 May 1917 at a house in Garnek, near Częstochowa, Poland. His grave is to be found at Borowno Poland