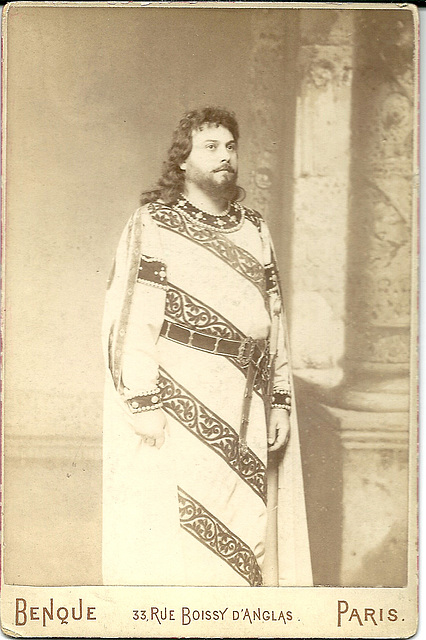 ERNEST VAN DYCK
(Ernst Marie Hubert VAN DIJCK )
(Anvers, 02 Aprill 1861 – Berlaar [Berlaar-lez-Lierre], province d'Anvers, 31 August 1923)
Belguim Tenor
First student in law at Louvain and Brussels, he became a journalist, editor of "the Scheldt" in Antwerp, from "the motherland" in Paris, where he worked with Saint-Yves-Bax singing. He was hired by Lamoureux concerts and was there cheering for five years in the music of Wagner. January 25, 1886, he created with the Concerts Lamoureux in the Eden-Théâtre le song of the Bell (Wilhelm) of Vincent d'Indy. When Lamoureux gave April 30, 1887, this theatre the memorable representation of Lohengrin in the French version of Charles Nuitter, Van Dyck was appointed to the role of Lohengrin. He was part of the cast of Bayreuth from 1888 to 1911; its beginning was resounding, and the young singer was immediately hired in Vienna, where he played in German: Parsifal, Lohengrin, the gold of the Rhine, the mastersingers of Nuremberg, then Faust, Romeo and Juliet, Manon, and finally Werther (Werther), which he created at the imperial Opera on February 16, 1892 in the German version of Kalbeck. He continued to sing annually at Bayreuth, where he became the Wagnerian tenor by excellence. Covent-Garden, its success was not less complete. March 14, 1897, he created in Monte - Carlo Moina (Patrice) of Isidore de Lara. He sang repeatedly the operas of Wagner at the Opéra de Paris in 1897, in 1908, and notably in 1914 when Parsifal was staged for the first time. On 1 April 1913, he staged the Freischütz at the Théâtre des Champs Elysées. Van Dyck was one of the most accomplished Wagnerian tenors.