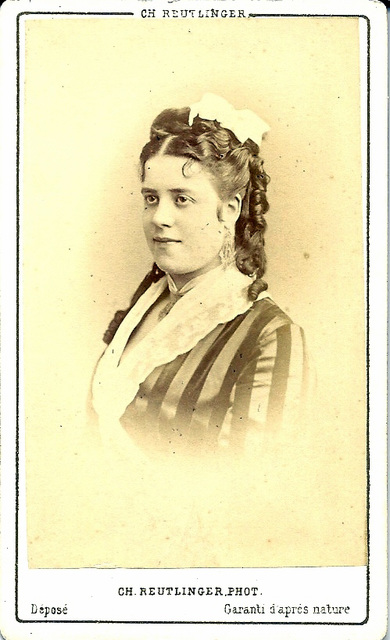 ROSINE BLOCH (7 November 1844 – 1 February 1891) was a French operatic mezzo-soprano
Most of her career was spent performing at the Opéra in Paris, she also appeared in stages in Belgium, Monaco, and England.
She studied at the Paris Conservatoire with Nicolas Levasseur and Charles-Amable Battaille and in 1865 won the Conservatoire's first prize for singing and the first prize for opera.]

She made her professional opera debut on 13 November 1865 at the Opéra's Salle Le Peletier as Azucena in Giuseppe Verdi's Le trouvère and continued singing in that theatre, where her most notable roles included Lelia in Félicien David's Herculanum and Léonore in Gaetano Donizetti's La favorite. She also sang Edwige in Gioacchino Rossini's Guillaume Tell (with Jean-Baptiste Faure as Guillaume and Marie Battu as Mathilde in 1868 and with Caroline Carvalho as Mathilde in 1870), and Fidès in Giacomo Meyerbeer's Le prophète in 1872. Although Bloch was striking in appearance with an ample, rich-timbred voice, it had become apparent over time that her portrayals lacked the "human quality" necessary for her to become a major star. Nevertheless, in the ensuing years she remained an honorable and respected member of the company.

She also created two roles, Lysis in the world premiere of Jules-Laurent Duprato's 1-act La Fiancée de Corinthe, which had a libretto by Camille du Locle and was first performed on 21 October 1867, but was an opera that would soon fall into obscurity after only 14 representations, and Claribel in Eugène Diaz's 3-act La Coupe du Roi de Thulé, which had a libretto by L. Gallet and Edouard Blau and premiered on 10 January 1873, but would only be performed 21 times. The latter had won a competition which had been held by the Ministry of Fine Arts in 1869.
Suggested groups:
Comments