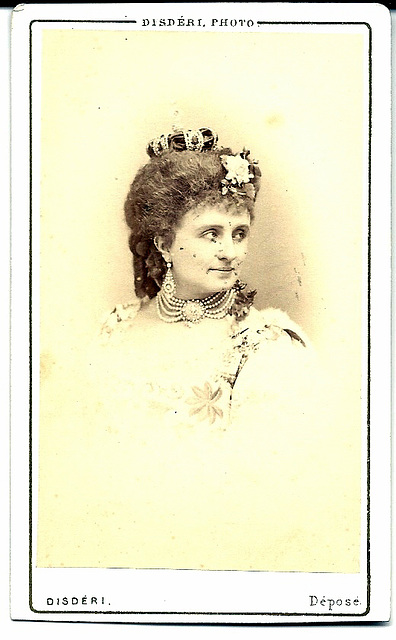 HORTENSE CATHERINE SCHNEIDER, La Snédèr, (30 April 1833 – 6 May 1920) was a French soprano, one of the greatest operetta stars of the 19th century, particularly associated with the works of composer Jacques Offenbach.

]Born in Bordeaux, where she studied with Schaffner, she made her debut in Agen in 1853, as Inés in La favorite.

She came to Paris and was turned down by the director of the Théâtre des Variétés but was noticed by Jacques Offenbach who invited her to the Théâtre des Bouffes Parisiens, where she made her debut in 1855 in Le violoneux. She enjoyed immediate success and created for Offenbach the role of Boulotte in Barbe-bleue and the title roles in La belle Hélène, La Grande-Duchesse de Gérolstein and La Périchole, all resounding triumphs. She also appeared in London and Saint Petersburg, to great acclaim.

An accomplished singer and actress, she was much admired for her brio and verve on stage, was the toast of the Second Empire and a favourite of royal visitors to Paris. La Snédèr was reputedly one of King Edward VII's mistresses (because of the favours which she liberally granted to the members of the nobility, she was known as Le Passage des Princes.). She retired in 1878, after her marriage, and died in Paris over forty years later at age 87.
Suggested groups:
Comments