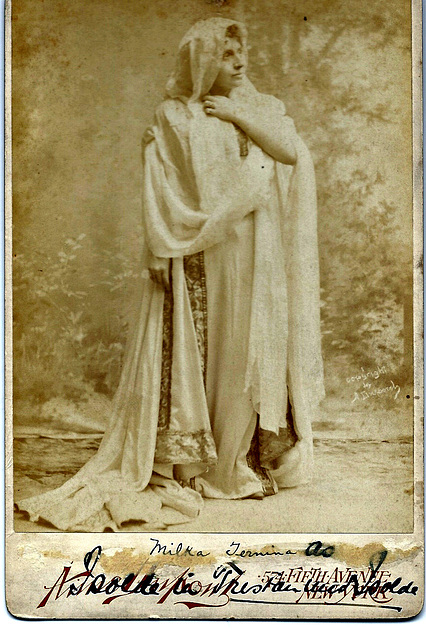 MILKA TERNINA
1861-1941 Croation Soprano
She began her vocal studies at age twelve. First formed by Ida Winterberg in Zagreb, then 1882-84 by Joseph Gänsbacher in Vienna. She debuted in 1882 in Agram (Zagreb), while she was still studying, as Amelia in "Masked Ball" by Verdi. 1883-84 she was engaged at the Opera House Leipzig, 1884-86 at the City Theater of Graz, 1886-89 at the Municipal Theatre of Bremen, then 1890-99 at the Munich Court Opera, where she had great success and was still performing until 1906 as a guest. 1897 she worked there with the premiere of the opera "Sarema" of A.Zemlinsky in the title role. In 1896 she sang in Moscow at a concert on the occasion of the coronation of Tsar Nicholas II. In 1896 she undertook the German Opera Company, a North American tour. 1899 was admired at the Festival of Bayreuth their Kundry in "Parsifal". In 1900 she created at the Covent Garden Opera, where she was a regular guest from 1898 to 1906 (commencement role: Isolde in "Tristan"), the title role in the premiere of Puccini's "Tosca". Further appearances at the Court Opera in Berlin (1887), the Municipal Theatre of Zurich (1897) and the Municipal Theatre (Opera House) from Hamburg (1901). In 1890 it got its North American debut when she sang Elsa at the Opera of Boston in "Lohengrin". In 1899 she was appointed to the Metropolitan Opera New York, where she began her involvement with the game of Elisabeth in "Tannhäuser". In 1900 she sang again the title role in the premiere of Puccini's "Tosca", 1903 Kundry in the Forbidden Bayreuth American premiere of "Parsifal". She went to the Metropolitan Opera for four seasons until 1904 in 74 performances and 15 games in, including as Isolde, Brünnhilde, as Sieglinde, as Elsa, as Santuzza in "Cavalleria Rusticana" and as Leonore in "Fidelio". In addition to her work on stage, they also exhibited a concert career on an international level. 1909-12 she worked as a teacher at the New York College of Music. Because of progressive facial nerve paralysis she had to end her career in 1916 final. She lived ever since as a singing teacher in Zagreb, where she perceived a professor at the Conservatory since 1933. Among her pupils was the famous soprano Zinka Milanov.Ihr repertoire contained 85 large lots from all walks of soprano compartment; their Isolde as their Leonore in "Fidelio" were considered special excellence within their artistic generation.
Suggested groups:
Comments