Clouds and boats... HFF! Welcome to modern Lisbon Swallows don't like to take flight alone ... Always graceful and bustling, they come back in s… A fan of warter...HBM! The desire to try... In Portugal, Children's Day is celebrated on 1 Jun… Spring nests in the Wall Esplanada TIM-TIM Celebrating with joy and visible faces the return… She overcome the fence.. HFF! ... on death in life. The path is rarely linear, in zigzag it's easier " And All That Jazz" Before the concert…HBM! Parallel Lines and Intersecting Lines The lighthouse is slave of those you lighten the l… Shadows.. the tumultuous and creative life of Luis… Day of Portugal and the Poet Camões, annually on… HAPPY FENCE FRIDAY! "European Conference on Architectural Policies" Geometry in the wall Wall Geometry "When you get to the end of your rope, tie a knot… The lilac flowers of the jacarandá appear to annou… Explosion of lilac Grey skies are just clouds passing over Without sails, navigators would not be able to suc… Romantic Sintra, an inspiring place for artists an… ..in towns, the gods play in harmonious garden… When Water Falls, It Flies Museum Vieira da Siva & Arpad Szenes With these two handsomely interlaced goals ... it'… He is perplexed... Bouquet running in a pink Vespa... It desires that… Belongs to the past.. The wooden architecture in space urban After the parade.. HB(M)! A church isn't only a building to those who have f… International Douro River in Barca de Alva Landscape in border, Barca de Alva The graciousness of the neo-Gothic house of the Ma… Typical street within the walls, Ciudad Rodrigo Detail of facade, Ciudad Rodrigo Coat of arms of a manor house, Ciudad Rodrigo 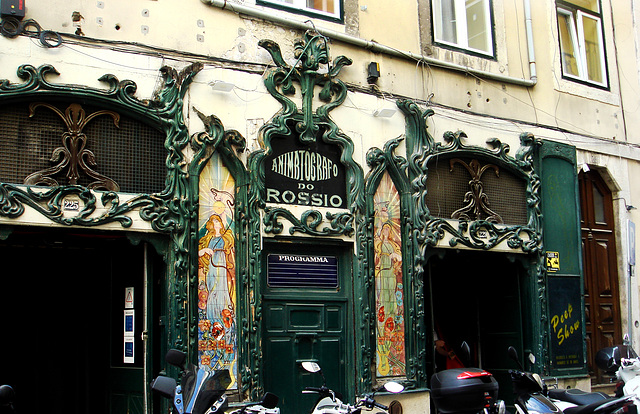 Since the year of its foundation, in 1907, the Animatógrafo do Rossio started out as the most luxurious cinema hall in Lisbon, later became a children's theater room but in 1994 and until now has been showing peep shows, striptease shows and pornographic films.

But, if nothing inside is the same as before, on the facade many things remain the same.

More than a century later, it façade continues to leave no one indifferent for its elements of Art Nouveau, painted in green, that frame the three spans of the façade.

More discreet, but equally beautiful are the tile panels dedicated to the theme of electric light, with two female figures holding lamps


Many thanks for your visit, kind comments and favs

I'm not overly keen on the green ironwork, but the tiles depicting the lamp holders, are quite stunning! Beautifully captured.

My feeling is the tiles should be removed and restored and then put away safely until the building is renovated.
7 months ago. | Permalink
J.Garcia club
has replied to Keith Burton club

The Building is considered of Public Interest, Keith
7 months ago. Edited 7 months ago. Translate | Permalink

Very imptressive decorated cinema of former times. It' s a style which I like very much. Wish you a fine evening, Judite !
7 months ago. | Permalink
J.Garcia club
has replied to Percy Schramm club

I wish you also a fine evening, Percy!
7 months ago. | Permalink

Wow ! The fassade is really impressive ! And thanks for this interesting text, Judite !
7 months ago. | Permalink

The characteristic facade is beautiful and with a not so heavy restoration it could return to its past splendor. The problem would be how to use the interior.
7 months ago. | Permalink
J.Garcia club
has replied to goandgo club

It's the problem, Goandgo
I think that is the only peep show in Lisbon
Times change, wills change…
7 months ago. | Permalink

Beautiful facade but I wouldn't care much for what's inside.
7 months ago. | Permalink
J.Garcia club
has replied to RHH club

Thanks for your visit, Judite.
7 months ago. | Permalink
J.Garcia club
has replied to RHH club

Have a good day.
7 months ago. | Permalink
J.Garcia club
has replied to RHH club

Admired in:
www.ipernity.com/group/tolerance
7 months ago. | Permalink

Often it's good that times change, but sometimes it's not. I like these old-style movie theaters, I used to live close to one in Sacramento, CA (although one probably wouldn't think of "old-style" in connection with the USA) ;-)
7 months ago. | Permalink