Without sails, navigators would not be able to suc… Grey skies are just clouds passing over Explosion of lilac The lilac flowers of the jacarandá appear to annou… "When you get to the end of your rope, tie a knot… Times change… Clouds and boats... HFF! Welcome to modern Lisbon Swallows don't like to take flight alone ... Always graceful and bustling, they come back in s… A fan of warter...HBM! The desire to try... In Portugal, Children's Day is celebrated on 1 Jun… Spring nests in the Wall Esplanada TIM-TIM Celebrating with joy and visible faces the return… She overcome the fence.. HFF! ... on death in life. The path is rarely linear, in zigzag it's easier " And All That Jazz" Before the concert…HBM! Parallel Lines and Intersecting Lines The lighthouse is slave of those you lighten the l… ..in towns, the gods play in harmonious garden… When Water Falls, It Flies Museum Vieira da Siva & Arpad Szenes With these two handsomely interlaced goals ... it'… He is perplexed... Bouquet running in a pink Vespa... It desires that… Belongs to the past.. The wooden architecture in space urban After the parade.. HB(M)! A church isn't only a building to those who have f… International Douro River in Barca de Alva Landscape in border, Barca de Alva The graciousness of the neo-Gothic house of the Ma… Typical street within the walls, Ciudad Rodrigo Detail of facade, Ciudad Rodrigo Coat of arms of a manor house, Ciudad Rodrigo JULIÃO SARMENTO 1948-2021 Cathedral of Santa Maria, Ciudad Rodrigo HBM ! Jingle bells, jingle bells...Mother's Day in Portu… WINE - Joy at the wine press and table Fence for an underwater city. HFF!

Romantic Sintra, an inspiring place for artists and poets 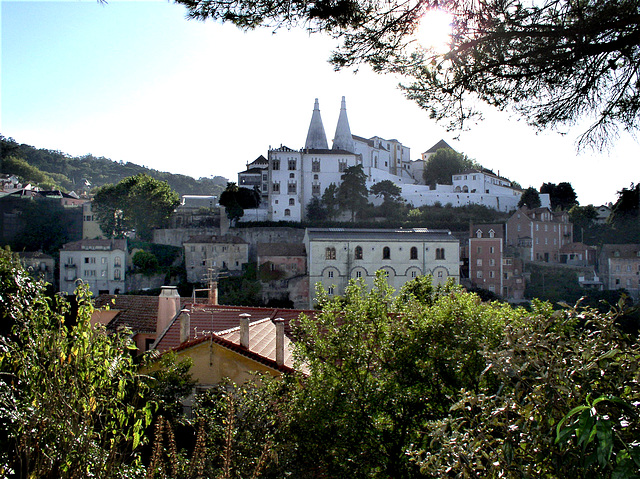 Sintra National Palace presents characteristics of Medieval, Gothic, Manueline, Renaissance and Romantic architecture.
It is considered an example of organic architecture, of a set of bodies apparently separate, but which are part of a whole articulated among themselves, through patios, stairs, corridors and galleries. It has the largest set of Mudejar tiles in the country.

The Palace was used by the Portuguese Royal Family until the end of the Monarchy, in 1910.


press Z, please
Many thanks for your visit, kind comments and favs

Suggested groups:
25 comments - The latest ones

That’s a wonderful view, Judite. I’ve been there some years ago. Really a beautiful and inspiring place !
7 months ago. | Permalink

Excellent panoramic image of the unmistakable National Palace.
I visited Sintra and its surroundings a few years ago and the memory is still vivid and pleasant.
7 months ago. | Permalink

A great view over the trees to the palace. It looks lovely in the sparkling sunshine.
7 months ago. | Permalink
J.Garcia club
has replied to Keith Burton club

Yes, Keith
When talking about Sintra in the sec. XIX the most recurring figure is that of Byron, who at Lawrence Hotel will have written part of his "Child Harold Pilgrimage", where he dedicates verses to Sintra:

In variegated maze of mount and glen.

Ah me! what hand can pencil guide, or pen,

Than those whereof such things the bard relates,

You lived in Lisbon / Sintra
I understand, Jutta
7 months ago. | Permalink

Wonderful place and a place I would dearly love to visit.
7 months ago. Translate | Permalink
J.Garcia club
has replied to RHH club

Oh, yes!
It's a very beautiful place with an impressive Nature and History, near Lisbon, 30km
7 months ago. Edited 7 months ago. | Permalink

Thanks for your visit, Judite.
7 months ago. | Permalink
J.Garcia club
has replied to RHH club

Have a good day and a good weekend.
7 months ago. | Permalink
J.Garcia club
has replied to RHH club

Thanks and the same to you, Ron
7 months ago. | Permalink

It sounds like a great place to visit.
7 months ago. | Permalink
J.Garcia club
has replied to Esther club

Thanks and Happy Pentecost, Rainer!
7 months ago. | Permalink