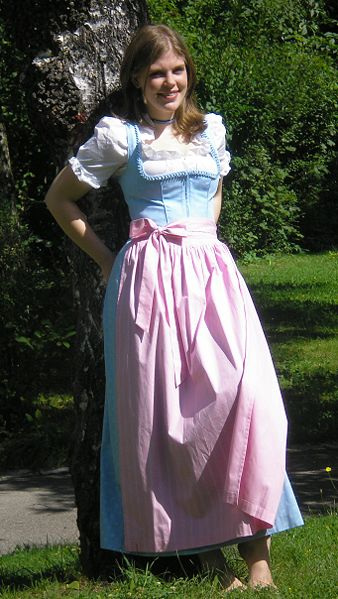 The dirndl originated as a simplified form of folk costume; the uniform of Austrian servants in the 19th century (dirndlegewand means "maid's dress"). Simple forms were also worn commonly by working women in plain colours or a simple check. Originally, each village had its own style and crest.
The dirndl consists of a bodice, blouse, full skirt and apron. While appearing to be simple and plain, a properly-made, modern dirndl may be quite expensive. In the South German dialects (bairisch), 'dirndl' originally referred to a young woman or a girl, and 'dirndlkleid' to the dress. Nowadays, 'dirndl' may equally refer to either a young woman, or to the dress.

Nouchetdu38, have particularly liked this photo

Thank you Surendra. I wanted to show you this characteristic of my native country.
13 years ago. | Permalink