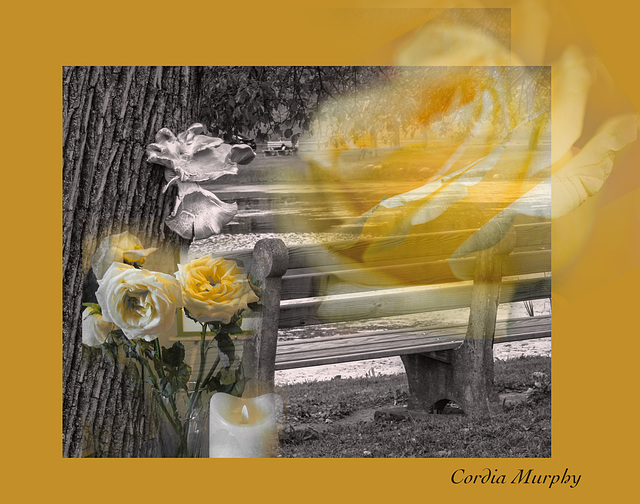 I am trying to depict the end of the season. The large rose was taken when it was vibrant and alive, the same rose(s) after four days and wilting and the mushroom down by the pond which to me is after summer has been going for a while.

This is my week. It was sort of mundane except for taking pix of flowers and parks.

Put originals in the notes.

PS I am not a fan of photo collages even a physical photo collage. Have always (since I was a young kid and in art school) done them in mixed medium. My experience is that they are done in layers and being that digital photography is one dimensional, the only way I could achieve layers is by using layers. I could not physical cut the pieces and did so by utilizing layer masks.

Here's how I always did collages.

"Collage (from the French: coller, "to glue";[1] French pronunciation: ​[kɔ.laːʒ]) is a technique of an art production, primarily used in the visual arts, where the artwork is made from an assemblage of different forms, thus creating a new whole.

A collage may sometimes include magazine and newspaper clippings, ribbons, paint, bits of colored or handmade papers, portions of other artwork or texts, photographs and other found objects, glued to a piece of paper or canvas. The origins of collage can be traced back hundreds of years, but this technique made a dramatic reappearance in the early 20th century as an art form of novelty.:

This turned out beautifully !!!
6 years ago. | Permalink

Would not have thought of using layering or filtering to create a collage.
6 years ago. | Permalink

I am sorry to say that folks...
but from my Point of view this is the best of this week ....

A masterpiece ... absolutely amazing and stunnig
from the idea to its realization.
6 years ago. Edited 6 years ago. | Permalink

more layering than a college, but it's a pretty collection.
6 years ago. | Permalink
Coco club
has replied to Shuttering Yukon

I appreciate your compliment.

I guess I am from the old school but I was taught to do collages by laying objects and photographs next to each other or on top of each other to create a different, coherent other piece of art. I couldn't do that with digital photographs so used the next best thing or layers and transform to change size and position and layer masks to cut the pieces out. I would have liked to have made it more detailed but we were told to use three different pieces and that's what I did.

Here's the definition that I went by

"Collage (from the French: coller, "to glue";[1] French pronunciation: ​[kɔ.laːʒ]) is a technique of an art production, primarily used in the visual arts, where the artwork is made from an assemblage of different forms, thus creating a new whole.

A collage may sometimes include magazine and newspaper clippings, ribbons, paint, bits of colored or handmade papers, portions of other artwork or texts, photographs and other found objects, glued to a piece of paper or canvas. The origins of collage can be traced back hundreds of years, but this technique made a dramatic reappearance in the early 20th century as an art form of novelty."
6 years ago. | Permalink
Shuttering Yukon
has replied to Coco club

yea I agree Cordia, It is a collage just not what I had in mind. I am not saying it is wrong, it was just different. A few weeks ago we had me doing the bokeh challenge different than everyone else.
6 years ago. Edited 6 years ago. | Permalink

...even though it is not really a collage I have to agree with Katja. This is a little piece of art. Absolutely outstanding!
6 years ago. | Permalink

There are different ways to create a collage, many examples even in Google Image Search! You did a nice job here!
6 years ago. Translate | Permalink
Coco club
has replied to Dida From Augsburg club

I totally agree now that I have done some research. I guess I am older than most folks here so when we did a photographic collage or included photographs, they were physical. We didn't have digital. Eons ago...tee hee.
6 years ago. | Permalink

This is so beautiful Cordia and I like how you included the actual definition of the word "collage" as I was only thinking of it as separate pics in individual frames (like I did mine.)

This reminds me of how I used to make them when I was in high school back in the 1970s and actually cut the pictures out and glued them on top and around each other. That was lots of fun to do that way.

I think this is an excellent interpretation of the challenge!
6 years ago. | Permalink

Beautiful artwork, Cordia, lovely contrast and layering. Yes, it's interesting how the meaning of collage has evolved in the digital world.
...Collage made from photographs, or parts of photographs, is called photomontage. Photomontage is the process (and result) of making a composite photograph by cutting and joining a number of other photographs. The composite picture was sometimes photographed so that the final image is converted back into a seamless photographic print. The same method is accomplished today using image-editing software. The technique is referred to by professionals as compositing.
...Collage in the modernist sense began with Cubist painters Georges Braque and Pablo Picasso. According to some sources, Picasso was the first to use the collage technique in oil paintings. According to the Guggenheim Museum's online article about collage, Braque took up the concept of collage itself before Picasso, applying it to charcoal drawings. Picasso adopted collage immediately after (and was perhaps indeed the first to use collage in paintings, as opposed to drawings)
Wikipedia
6 years ago. | Permalink

great idea to do it in this way
6 years ago. | Permalink

I remember but it looked great. That's the wonderful thing about people. We are all so different. Best to you.
6 years ago. | Permalink

A wonderful result and it is so nice to see someone thinking outside the box!
6 years ago. | Permalink

Wonderful, well done my friend.
Thank you for sharing your exceptional creation with us, here in ✴ Digital Dreams ✴
www.ipernity.com/group/1493642
6 years ago. | Permalink

I like your creativity in making this.
6 years ago. | Permalink