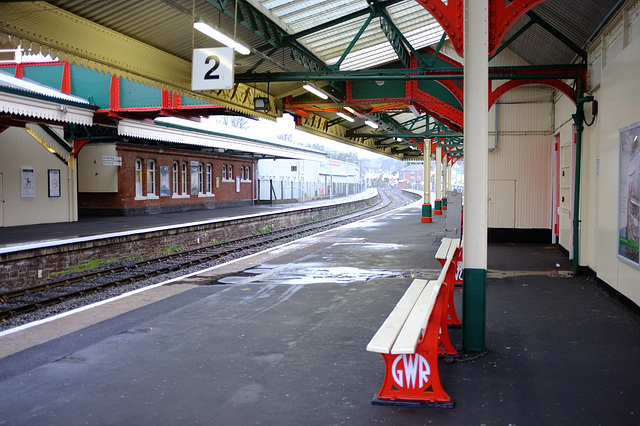 Paignton is the last station on the British Railways mainline from Newton Abbot into South Devon. Beyond the level crossing in the distance the line belongs to the Dartmouth Steam Railway whose platform is behind the buildings on the left of the picture.

The steam railway runs from Paignton to its terminus at Kingwear. From there it's a short ferry trip across the River Dart to Dartmouth Railway Station - a railway station that has never sen a train in the whole of its existence! There used to be a spur from Churston into Brixham but, sadly, this didn't survive the Beeching axe in 1963. The track bed is still there but the track was lifted long ago and Brixham Station is now a housing estate.

This You Tube film shows a complete trip right through to Kingswear and back to Paignton:

This is a neat station! Nice angle for this shot too. I appreciated the information above, it's always so nice to know more about the subject being photographed.

it was very interesting to learn about the station that was never used. What a shame! I was amazed to find out that there are many stations like that one around the world and they were bricked up to keep them away from public view. Others were abandoned or taken off lines, or entire lines erased from transit maps, yet the stations remained, blocked off and slowly fading into "secret stations". I'm not telling you anything you don't know but here's a google link just in case you're interested:
www.google.com/search?q=hidden+railway+stations&oq=hidden+railway+stations&aqs=chrome..69i57j33.7007j1j7&sourceid=chrome&ie=UTF-8

I see that there's actually a BBC show that focuses on these old relics so for sure you're very familiar. I learned about these stations via this podcast:
www.npr.org/2019/01/28/689273526/underground-digs-up-the-secrets-of-hidden-communities-around-the-world

It's all so interesting!
2 years ago. | Permalink