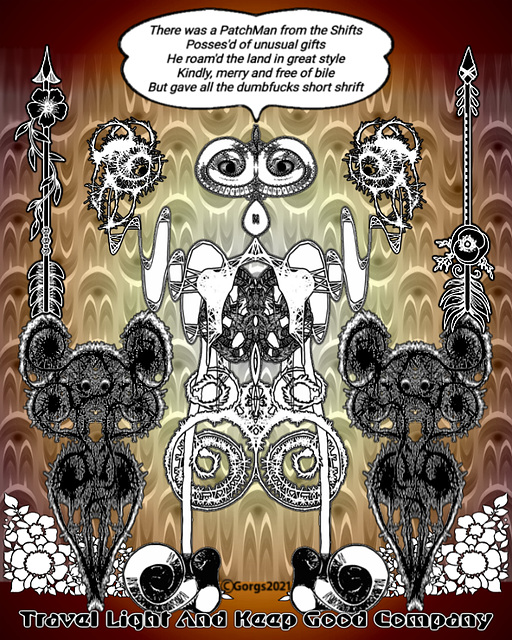 Patchwork Entities. Behold the Mishmash Man, also known as the Bits & Pieces Man. He was made with leftovers, discarded stuff from the cast off creations of several smarty-pants bombastic demiurges, by a down&out avant-garde sorcerer with a taste for recycling. He travels the Uncertain Shifts with his spiky owlets and a couple of defrocked warrior princesses he met at a villainous tavern in the alien district of !Ting who, unable to find any kind of job in any respectable army or even any disreputable one, volunteered to tag along as his bodyguards and purveyors of silly jokes. They (the ragbag geezer and the two louche damsels) are willing to undertake some (not many) special ops of the Annoy, Harass and Torment variety for a nominal prize* and for the mere joy of it. The owlets can carry messages to & from their higher-born cousin, the owl of Pallas, if you ask them very, very nicely and your message is not total fiddle-faddle.
*They neither need nor care for money. They don’t eat and they are quite content to be like the lilies of the field; the raggedy bloke wears whatever the eccentric necromancer clad him in back when and the two misses what they were wearing at the time they had to leg it from whatever sphere they decamped. However, if you offer them a discarded teddy bear or black and white picture postcards of the Plateau of Leng, they’ll throw in a bonus ball of sending nightmares to Priti Patel, for free, por la cara.
duckduckgo.com/?t=ffab&q=plateau+of+leng&iax=images&ia=images

Peter G, ╰☆☆June☆☆╮, William Sutherland and 2 other people have particularly liked this photo

Good work, love it Dodo.
Have a nice weekend, and stay safe.
3 months ago. | Permalink
dolores666 club
has replied to ╰☆☆June☆☆╮ club

Thanks June!
3 months ago. Translate | Permalink

And thank you Dude & Fred,
3 months ago. | Permalink