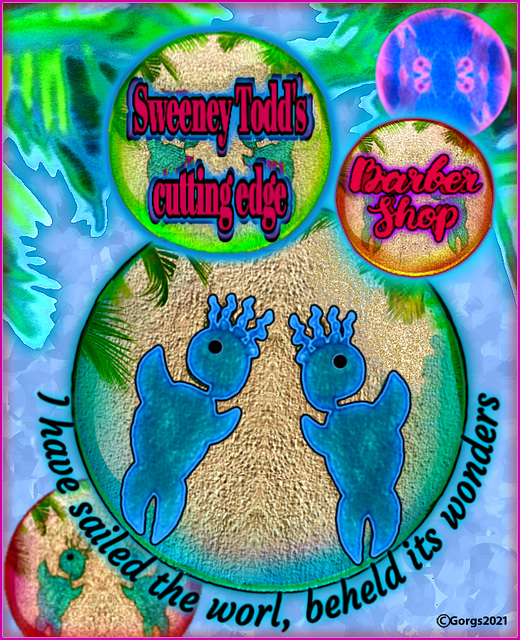 As promised here is the first account of the solo adventures of the two absconded proto-thingies from the down-under cave. They floated merrily in their peregrine bubble, hither and thither, and suddenly they were confronted by a particularly disturbing instance of the Perpetual Struggle Against Iniquity. Having listened to both the urban legend and the Sondheim opera in toto they concluded that, whilst having some very valid evidence to justify his desire for retaliation ad expiation, nevertheless Mr. Todd’s methods were a tad extreme. As for Mrs. Lovett, the creatures reluctantly and grudgingly gave her some credit for her entrepreneurial, if mercenary, spirit. On the count of Judge Turpin and the Beadle, they inclined towards agreement with Todd: they deserved to die, although they would not have touched any pie made from such noxious beings. Why, it may very well have given them the runs, if not worse! Then they departed the scene and went on to their next experience as fast as the bubble would carry them.
Have a splendid week and un po’ di appropriate mu’
www.youtube.com/watch?v=_Kt5PsyEMWk
www.youtube.com/watch?v=fqIq1rYTb2I

Dutt Changgle, William Sutherland, Amazingstoker and 2 other people have particularly liked this photo

Thanks folks!
4 weeks ago. Translate | Permalink