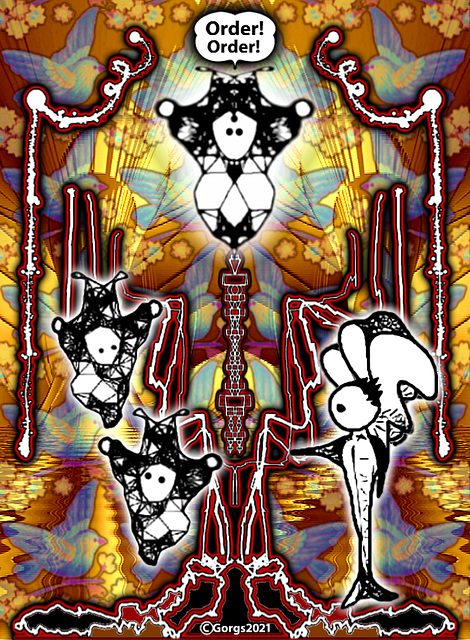 In these godawful times of heightened pretentious nonsense and language distorted, when not downright corrupted, there’s a new kid on the pompous linguistic block: elevate. A perfectly ordinary, useful and sensible word is being tossed all over the place, in the most absurd of contexts, whether appropriate or not. In protest to this kind of balderdash, the young Webbies have decided to “elevate” mischief to new heights and, having broken into the private cellars of the Shub-Niggurath, have gotten gloriously plastered. They can be seen here re-enacting a regular session in our very own House of Commons -who seem to be getting commoner by the day.
This inglorious conduct has caused much shock and awe amongst their relatives and their governess, the Slender Butterfly Man. We, personally, are very much inclined to join in the fun. As I said, times are really crappy and any break from the unquestioned official piffle is most welcome. Even the Shubby has looked upon the misdemeanour with a nebulous shade of indulgence. After all she doesn’t drink, really. She only keeps a cellar to annoy the Final Void branch of the Temperance League, dontyouknow.
Today, instead of the usual un po’di mu’, I offer a snippet of wisdom found in, of all places, a P. G. Woodhouse novel. I dedicate it to Jeff Bezos, Bill Gates and Warren Buffet. Enjoy.
"He was suffering from that form of paranoia which makes men multimillionaires. Nobody would be foolish enough to become a multimillionaire if it were not for the desire to prove himself irresistible."
Translate into English

Elevate? What’s being elevated all over the place? Who?
2 months ago. | Permalink
dolores666 club
has replied to Steve Bucknell club

Keep an eye on TV adds: "presences", dinner plates, self-image, presentations... You name it, everything and anything has to be "elevated" these days. Ugh! :-(
2 months ago. | Permalink

Cheers, babes. You too.
8 weeks ago. | Permalink