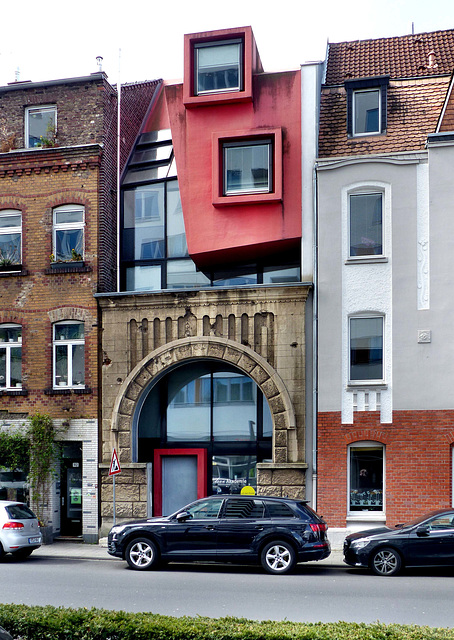 Bayenthal developed during the Industrial Revolution in the 19th century around newly founded factories and breweries. It was incorporated into Cologne in 1888. There are still some of the old worker´s homes, but the architecture, that survived the bombs during WWII, is mainly characterized by "historicism", showing the rise of the the bourgeoisie in the 1850s. The German term for this rime is "Gründerzeit". It refers to the economic upswing in the mid-19th century, when the founders of businesses (= Gründer = entrepreneurs) could become rich. Many buildings in Bayenthal were erected during the "Gründerzeit".

Here is another nice example of modern architecture in Bayenthal. Actually, only the arch of the facade was used from the former existing building. What looks small from the outside is a really large modern building.

The design by Manuel Herz was awarded a prize in 2003.
www.manuelherz.com/projects