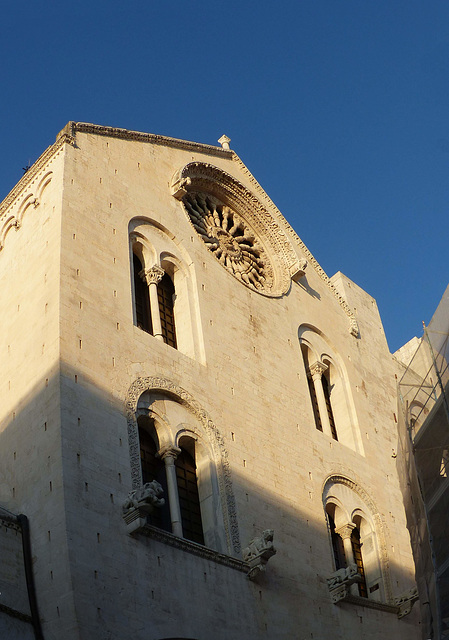 Bari was an early settlement and passed under Roman rule in the 3rd century BC. It developed strategic significance as the point of junction between the coast road and the Via Traiana and as a port for eastward trade. The first bishop of Bari was Gervasius who is known from the Council of Sardica in 347.

After the decline of the Roman Empire, the town was devasted and taken by Alaric´s Visigothic troops, then was under Lombardian rule, before the Byzantines took over. In 755 it was conquered by Pepin the Short (Charlemagne´s father) and from 847 on it was an Islamic Emirate. The Byzantine fleet returned in 871 and since 885 Bari ws the residence of the local Byzantine governor.

Following a three-year siege, Bari was captured by Robert Guiscard in 1071. After the relics of Saint Nicholas, which were surreptitiously brought from Myra in Lycia (Byzantine territory), arrived in Bari, the Basilica di San Nicola was founded in 1087. This attracted pilgrims, whose encouragement and care became central to the economy of Bari. Pope Urban II consecrated the Basilica in 1089. In 1096 a crusader army embarked in the port of Bari for the First Crusade.

After the murder of archbishop Griso in 1117 a civil war broke our and the control was seized by Grimoald Alferanites, a native Lombard, in opposition to the Normans. He later did homage to Roger II of Sicily, but rebelled and was defeated in 1132.

The Castello Normanno-Svevo (aka "Castello di Bari") was probably built around 1132 by Norman King Roger II. When in 1155 the Baresi rebelled against the Normans, the castle got destroyed, so as a retaliatory action, William I of Sicily (aka William the Wicked") had the city destroyed except for the cathedral and the Basilica of St. Nicola.

Bari recovered and had its heydays under Frederick II. When he returned from his crusade after 1229, the city gates were locked so he had to use force to gain entry. Therefore, he probably had the fort built in 1233 to keep the city in check. On the other hand, he granted the city generous trade privileges and left it the leading role in the region.

The construction of the "Cattedrale di San Sabino" (aka "Bari Cathedral" started around 1170 on. The cathedral is the seat of the Archbishop of Bari-Bitonto. It is dedicated to Saint Sabinus, a bishop of Canosa, whose relics were brought here in the 9th century.
It was erected on the site of the ruins of the Imperial Byzantine cathedral, destroyed in 1156 by William I of Sicily with the rest of the city.

For the reconstruction of the cathedral materials from the preceding church and other destroyed buildings got reused. During the 18th century the façade, the nave and aisles and the crypt were refurbished in Baroque style. The building later underwent a series of refurbishments, demolitions and extensions.

As a gate was open in the late afternoon, I could enter the yard and take this photo of the transept.