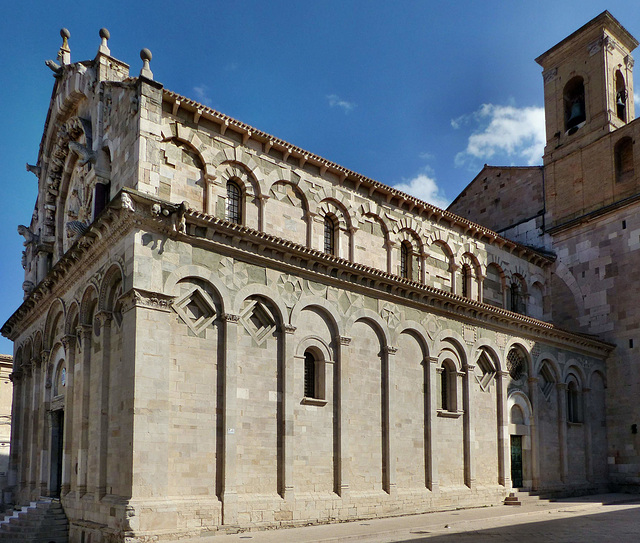 Troia was probably founded by Greek settlers under the name of Aecae. The current Troia was founded as a fortified town in 1018 the by the Byzantine general Basil Boiannes. For long it was a stronghold against the Normans and got besieged by the emperors Henry II and Frederick II, who destroyed the town in 1229.

He did not touch the "Concattedrale della Beata Vergine Maria Assunta in Cielo", erected in the first quarter of the 12th century where a Byzantine church formerly stood, that was apparently constructed largely from the remains of Roman buildings.

The Concattedrale di Troia, once the seat of the Bishops of Troia, now a co-cathedral in the diocese of Lucera-Troia, is reckoned a masterpiece of Apulian Romanesque architecture.

In particularly it is noted for the bronze doors of the main portal, created in 1119 by Oderisio da Benevento in niello technique, who "signed" his work. For Ursula Mende ("Die Bronzetüren des Mittelalters") these are medieval masterpieces.

The Concattedrale di Troia has a side portal, that like the main portal was created by Oderisio da Benevento.
Suggested groups:
Comments