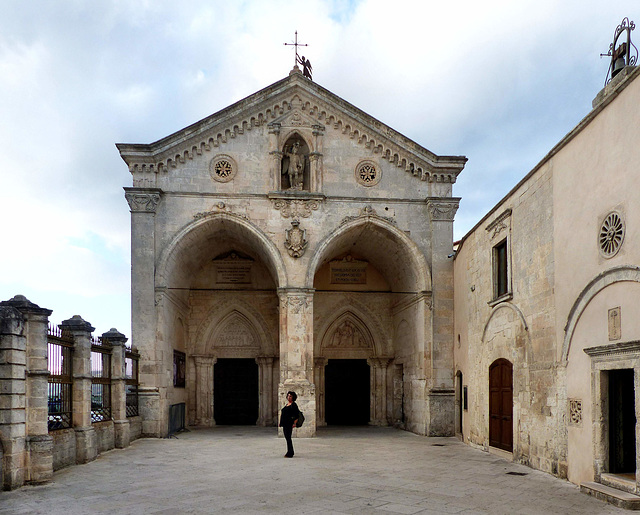 Legends tell, that in 490, 492 and 493 the archangel Michael appeared to a shepherd and a bishop in front of a grotto. Archangel Michael instructing them to convert that cave into a Christian church. This grotto became the site of many pilgrimages since the early Middle Ages. It is said, that this is the oldest shrine in Western Europe

When the Lombards successfully conquered southern Italy end of the 6th century, King Grimoald in 662 passed on the region to his son, Romuald I, who renovated the sanctuary and encouraged its use as a pilgrimage site. It got very popular for pilgrims on their way to Jerusalem and as well for pilgrims who had followed the Via Francigena to Rome and then continued to the grotto. Many Popes have been here, but as well Bridget of Sweden, Bernard of Clairvaux, Thomas Aquinas, Matilda of Tuscany, Otto III...

Behind a forecourt, the sanctuary presents a portico of two Gothic arches, the right one of 1395, the left one is a reconstruction of 1865. From the portico, steps lead down to the grotto. Since centuries pilgrims have used these steps - and left their names along the walls.