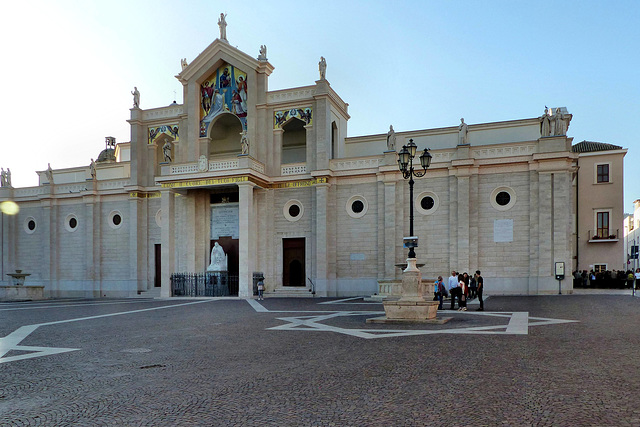 The history of Manfredonia starts in Siponto, where the Normans had established themselves in 1042. At that time the near mountain ridge "Monte Gargano" was still under Byzantine rule, what changed when in 1052 the Normans won a decisive victory there over the Byzantine troops in 1052.

An earthquake in 1223 destroyed Siponto and transformed the landscape into a swamp, where Malaria occurred. Siponto was abandoned and Manfred, son of Emperor Friedrich II, laid the foundation stone for a new city in 1256, which he gave his name to. Manfred still commissioned the construction of the fortress but did not see it completed. He fell in the Battle of Benevento in 1266 when his force was defeated by the army of Charles, Count of Anjou, what ended the rule of the House of Staufer in Southern Italy.

The Anjou completed the fortress and renamed the city "Sypontum Novellum", to erase the memory of Manfred, but the new name was ultimately unsuccessful.

When Manfredonia was conquered and looted by Ottoman Turks in 1620, the city was set on fire and razed to the ground, leaving only the fortress and the city walls. This destroyed as well the cathedral, that had been completed in1274 after the bishopric was moved to Manfredonia from Siponto.

It was not rebuilt until 1700, using the ruins of the old Angevin church. The new cathedral went through dozens of modifications and modernisations.